Boston – JM Electrical announced that its principal, John Guarracino, has been elected to serve a two-year term as a director of the Associated Subcontractors of Massachusetts (ASM), the Commonwealth’s leading trade association for the subcontracting industry, at the organization’s Biennial Dinner & Gala. 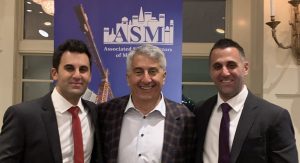 “I am thrilled to have a seat at the table as part of the Associated Subcontractors of Massachusetts board of directors, one of our industry’s cornerstone trade associations,” said Guarracino. “As a longtime member of ASM, I have benefitted from having access to the newest products, practices and industry trends and I look forward to contributing as a member of the board.”

“We are pleased to welcome John to our board of directors at this important moment in Boston’s development,” said Michael McDonagh, CEO of ASM.

Earlier in his career, Guarracino served as a project manager at JM Electrical from 2014 to 2018, joining the company in 2007. In his role as principal, he is responsible for overall company management and planning, with a primary focus on operations.

A licensed journeyman electrician since 2011, Guarracino earned his master’s license in 2015. The Massachusetts native has contributed to numerous high visibility projects at Mass. General Hospital, Logan Airport and the UMass Lowell campus.

In addition to his role at the Associated Subcontractors of Massachusetts, Guarracino is an active member of NECA and the Mass Building Congress.

“As a highly respected industry professional, we look forward to John’s guidance as ASM represents and promotes the interests of every subcontractor in the Commonwealth,” said McDonagh.

Founded in 1950, the Associated Subcontractors of Massachusetts represents over 350 subcontractor companies and thousands of employees, as well as suppliers and affiliated organizations in Massachusetts and surrounding states.

ASM is the only organization in the Commonwealth dedicated exclusively to the business issues affecting subcontractors, who perform more than 80% of the work on all major building construction in the state.