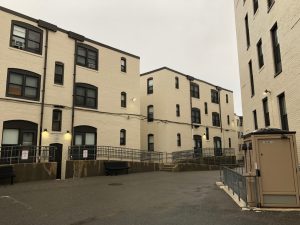 Boston – Abbot recently completed the continuation of a comprehensive repair project involving 24 interconnected brick and stone apartment buildings in the Grove Hall neighborhood of Boston’s Dorchester section, this time focusing on the exterior rear and side building elevations.

Abbot procured the project as the low bidder in a private bidding process among several competitive masonry restoration firms. For this portion of the project, Abbot continued to work in conjunction with the architectural/engineering firm of Thompson & Lichtner of Canton, who surveyed the properties, identified deficiencies, and developed a set of remediation plans.

Based on the survey, it was determined that the coated brick walls displayed numerous defects, including spalled brick, missing mortar between bricks, and debonded coating. 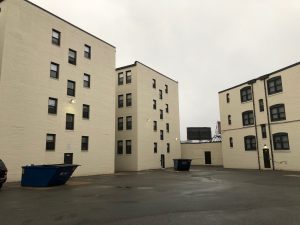 As a remedial action, Abbot power washed all of the brick to remove the debonded coating, repointed the brick masonry where necessary, replaced over 5000 deteriorated bricks in various locations to match the original size and shape, and recoated the walls with a high quality waterproof elastomeric coating.