After voters approved two referendums to fund the new school, State Representative Michelle Cook worked to obtain an 85% reimbursement from the state. During her remarks, Fiona Cappabianca, chairwoman of the Board of Education, thanked the community for its support, and Cook for her efforts, noting that a state reimbursement of this size in a small city is unheard of. 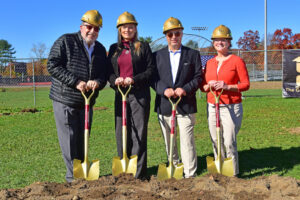 The new school is designed with separate entrances and wings for a 3-story middle school and 4-story high school connected by common facilities at the main level, including an auditorium, two separate dining rooms, two gymnasia, and support spaces for athletes. The school district’s central administration office will be located on the fourth floor of the high school wing and will have a separate entrance.

Designed by SLAM Architects, the building’s exterior features a modern curtainwall that infuses natural light and a brick facade that nods to the region’s beginning as an industrial leader. The interior spaces will foster hands-on learning in an environment that embodies the school’s mission: to provide students with a learning experience that will support their futures and careers. 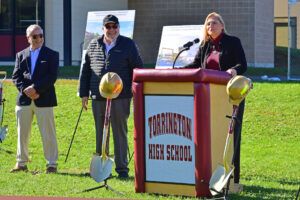 Occupancy of the new school is slated for February 2025. Demolition of the old building and construction of the new gymnasia and athletic fields will begin in March 2025, with a planned completion date of January 2026.