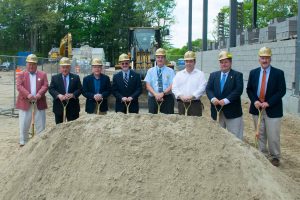 The $36.6 million, 98,000sf renovate-as-new project began with a soft start in the fall of 2014. In September, construction crews began work that would set the stage for a full-scale effort beginning immediately after the last day of school. Work will continue throughout the school’s summer break while the school is unoccupied.

“The renovation also creates opportunities for the school system. The renovation will allow us to launch a new medical pathways program and house the Putnam Alternative Learning School within the school again,” said Putnam School Superintendent William Hull.

The scope of the project includes replacing windows, renovating the science labs, expanding the gymnasium, transforming the existing library into a multimedia center, and upgrading the mechanical infrastructure of the 60-year-old building.

The project is expected to be completed in the summer of 2017.