The ground-up project of roughly 16,420sf will house the franchised private preschool and educational daycare facility. he new project will have the team performing all new site work and underground utilities. The two-story structure will contain a Schindler elevator and house numerous rooms, including ones for infants, toddlers, and preschoolers. A multi-purpose room featuring a climbing wall, enrichment rooms, and a kitchen are included in the project design, as are conference rooms and offices. 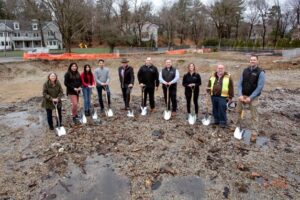 The building’s exterior will feature Hardie Shaker siding shingles and architectural asphalt shingles. An outdoor playground and charging stations for electric cars are also included in the $5-million-plus project.

Work on the new building was derailed in March of 2021 when a fire of unknown origin destroyed the building and roughly two months’ worth of construction, delaying the project by a year and shifting the scope from renovation to ground-up.  As a result, the ownership group commissioned an entire redesign of the project, at which time they brought in Acella Construction.

Acella Construction is slated to complete construction at the Milton site in a 46-week timeframe. O’Sullivan Architects. Inc. and Williams & Sparges of Middleton serve as project architect and engineer.