Plymouth, MA – More than 80 volunteers organized by local electrical contractor, Glynn Electric, came together on Labor Day weekend to help build three homes in partnership with Habitat for Humanity of Greater Plymouth. Two of the three homes have been designated for military veterans and their families. 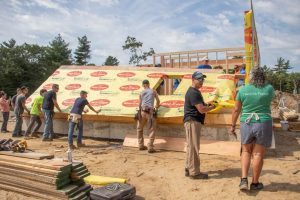 Volunteers work with Habitat for Humanity to build new homes.

The large scale volunteer build day was the culmination of more than five years of planning, permitting and fundraising. It began with a 2014 town meeting approval to convey the land to the non-profit group for the purpose of building affordable housing.

“Once all of our regulatory and financial requirements were taken care of, all that remained was to recruit teams of volunteers to actually come and build the houses alongside our selected homeowners. That’s where Glynn Electric stepped up and they did so in a big way,” said Jim Middleton, executive director of Habitat for Humanity of Greater Plymouth.

Plymouth-based Glynn Electric has a long history of working with Habitat for Humanity of Greater Plymouth. The firm has wired a number of homes free of charge for the organization over the past 10 years, but this event marks the first time so many from the company have come out for a single event.

One of the homes will go to a Marine Corps veteran and working mother of three. The other home will belong to a Bronze Star recipient who served in the military over a combined 16 years. Both women and their families were on site working as part of the volunteer construction crew.

This project is the first for Habitat for Humanity of Greater Plymouth explicitly intended to benefit military veterans. Middleton; Dave Drain, president of the board; and other members of the Habitat team pursued and attained a special status through the state of Massachusetts. This designation as a Veteran-Qualified Builder enabled them to deliver affordable housing earmarked specifically for veterans.