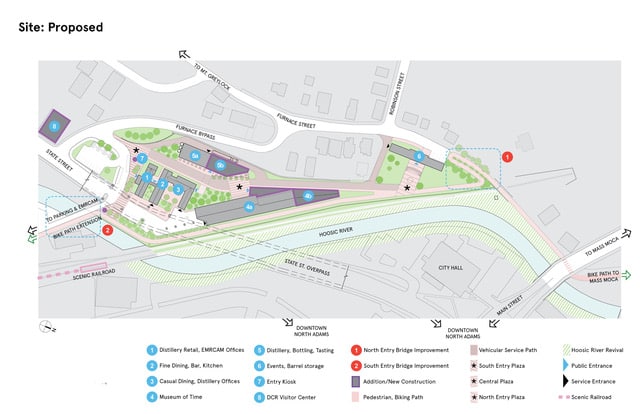 Heritage Park is a key component of the Cultural Corridor, a regional development initiative spearheaded by Thomas Krens, former director of the Guggenheim Foundation, that aims to transform the city and region into a world-class locus of contemporary art and architecture.

The plan focuses on a former depot for the Troy and Greenfield Railroad. It proposes improvements to better connect the park with four points: Main Street; Mass. MoCA; the restored Hoosac riverfront; and the site of the Extreme Model Railroad and Contemporary Architecture Museum (EMRCAM) by Gehry Partners.

Plans for the park will strengthen strategic connections within the city of North Adams and provide site and infrastructure improvements; it also includes schematic designs for repurposing six historic structures as a museum and craft distillery complex.

The site will be reorganized into three plazas. The South Plaza is expanded to help orient visitors arriving at Heritage Park and the EMRCAM. The Central Plaza comprises a grove of birch trees and outdoor seating. The North Plaza features an intimate amphitheater for performances and gatherings. The plazas are linked with a pedestrian path and a proposed extension to the Williamstown-Ashuwillticook Bike Trail.

Also included in the plan are schematic designs for adapting and expanding six industrial buildings for a variety of uses. These include:

“In addition to improving the experience for visitors to North Adams, our master plan will enhance the central role of the city in the Cultural Corridor and its anchor institutions, the Massachusetts Museum of Contemporary Art (Mass MoCA), and The Clark Art Institute,” said Gluckman Tang principal Richard Gluckman.