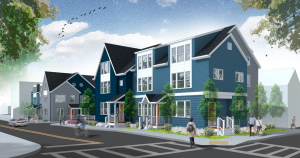 Construction began last fall on the Call Carolina development, located at the intersection of Call Street and Carolina Avenue, which will include four rental units and four units available for purchase.

McPhail Associates provided environmental engineering services for the remediation activity on the parcels, which were vacant for more than 50 years.

MassDevelopment oversees the Brownfields Redevelopment Fund, which helps to transform vacant, abandoned, or underused industrial or commercial properties by financing the environmental assessment and remediation of brownfield sites in “Economically Distressed Areas” of the Commonwealth. Since the Fund’s inception in 1998, it has supported 747 projects for a total investment of more than $108 million.