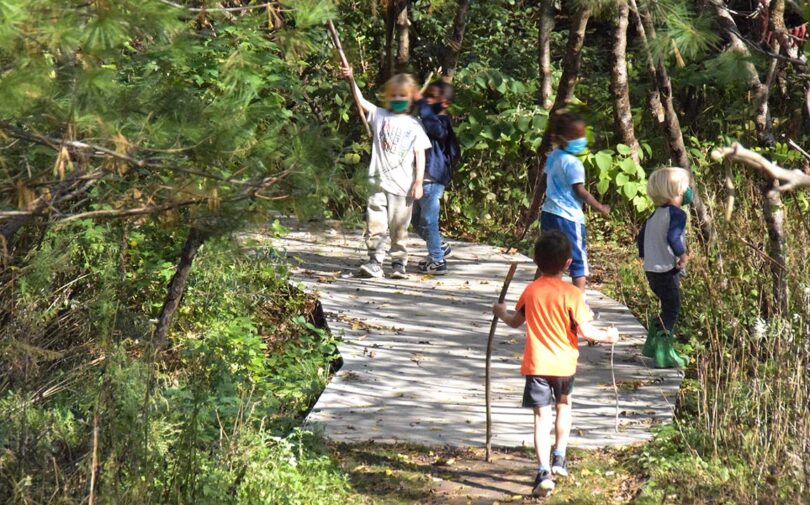 In the mid-1940s, landscape architect Lady Allen of Hurtwood petitioned for the first adventure playground in London. These playgrounds featured an abundance of unconventional structures, discarded household objects, and loose materials. Aside from utilizing unusable land, the playgrounds acknowledged broader social issues. Responding to WWII horrors, adventure playgrounds were “little models of democracy.” Children collaborated together and seemingly created a socially conscious society through children’s play. 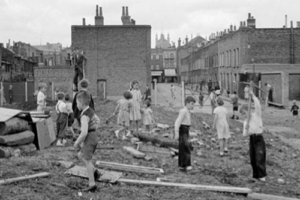 In the post-war spirit of rebirth, questions surrounding creative play surfaced. In Amsterdam, architect Aldo van Eyck was commissioned with building a public playground in each of the city’s neighborhoods. His principal consideration was to safeguard children’s creativity. The playgrounds were woven into the fabric of public parks, squares, and derelict post-war sites. With no clear partitioning between these playgrounds and city life, he also aimed to provide appropriate social engagement for the children.

During the 1970s, lawsuits against playgrounds arose. The era of the “standardized playground” began. In 1981, the Consumer Product Safety Commission published the Handbook for Public Playground Safety. Although safety regulations were important, the proliferation of identical-looking playgrounds incited public criticism and a decline in the use of public playgrounds. During the 1990s, efforts were made to fund play research to redefine the goals of the modern playground. The demand emerged to extend beyond standardized equipment to include spaces for people of all ages and abilities, with both natural and built environments. 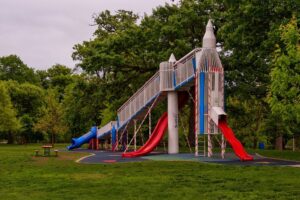 This trend toward inclusive play led to a shift in designing “playscapes.” The term was coined by Isamu Noguchi, whose playscapes blurred the line between fine art, landscape design, and childhood play. He believed that environments should challenge and inspire their users’ imaginations.

One modern version of a playscape, known as a nature playground, focuses less on the sculptural and artistic qualities of the pieces and more on using natural materials to design site-specific equipment that is built into the landscape. The landscape itself often becomes a playing piece. The modern playscape is not only concerned with incorporating access to natural elements, but also strives to create customizable, modular, and flexible equipment, giving children the freedom and autonomy to imagine their own play space.

Looking back at history, playground design has been impacted by political events, technological advancements, and the influences of developmental psychology. Some concepts and designs reappear throughout playground history, while others disappear from the design forever as new ideas take hold. 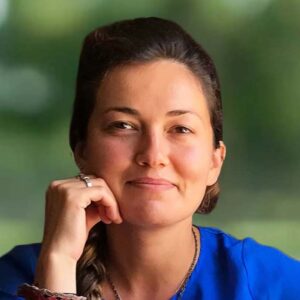 Naomi Heller is a landscape and architectural associate at studioMLA Architects.