Rendering courtesy of The Flatley Company

Charlestown, MA – In its recent master plan filing, the Flatley Company announced its vision for the redevelopment of the former Domino Sugar Factory site at 425 Medford Street.

In its redevelopment program, Flatley prioritizes climate resiliency, resulting in a project highlighted by a multimillion-dollar 2070 solution designed to protect the Flatley land and hundreds of acres of Charlestown and neighboring areas in Somerville and Cambridge. Additionally, it would protect both public and private properties and infrastructure from catastrophic flooding by building a 5-acre resilient solution at what is considered the most vulnerable breach point along the Mystic River. 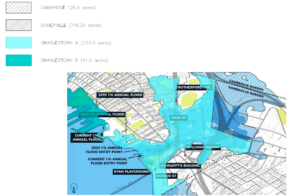 Flatley would plan to build the resiliency infrastructure components first. The resiliency components of Flatley’s plans would also save Charlestown from the need to undertake many of its own public projects aimed at the same goals. According to several planning studies, including 2017 Climate Ready Boston – Charlestown, without the measures put in place by Flatley, significant public infrastructure projects would have to be undertaken that would be costly to taxpayers and disruptive to residents, for years. The study concludes that the resiliency measures now proposed by Flatley would prevent an estimated $290 million in losses, caused by just a single flood event.

The new resilient edge to the waterfront would include an extension to the Harborwalk and other public pathways, passive and active recreation areas and seating, green spaces and parks, multiple look-out areas, shade shelters, floodable seat steps, and a public boat launch, kayak launch, and dock.

“We understand the urgency at this vulnerable point in the Mystic River and the tremendous impact it will have on the quality of life of residents and businesses in Charlestown. We felt strongly this is something that needs to be done first as part of our development in order to protect this area from storms. We believe this project is for the people of Charlestown, the surrounding community and city and will alleviate the tremendous disruption that could occur with multiple municipal infrastructure projects throughout the neighborhood,” said John Roche, The Flatley Company.

Flatley will present the 425 Medford Master Plan to the community at an Open House on Nov. 29 at 6:00 p.m. The public is encouraged to join and can sign up for the zoom webinar in advance here.