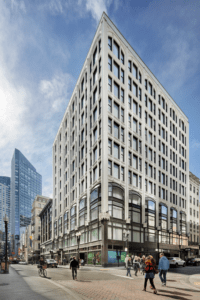 The 242-room hotel design re-imagines two historic office buildings as a sanctuary in the city, activates the street edge, and contributes to the revitalization of the Downtown Crossing neighborhood, preserving two historic Arthur Bowditch buildings. 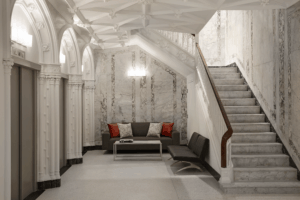 Finegold Alexander led the design and rehabilitation team, which focused on restored elements, reinterpreted storefronts, and the core and ground floor retail shell. It collaborated with The Gettys Group on the program and space plan as well as integration of the architectural restoration/renovation with the new elements to reflect the brand concept. The project included a lobby/lounge, cicchetti bar, conference room, fitness room, core and shell for ground-floor restaurant and coffee shop. 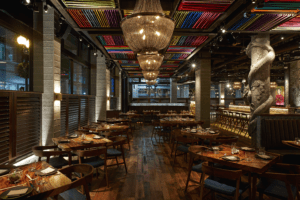 The Gettys Group designed the interior spaces of The Godfrey to offer a calming oasis amid a vibrant urban scene. A dramatic architectural portal seamlessly transitions the clean lines of the reception area and the intricately detailed historic elevator lobby. Cerused oak paneling, polished porcelain flooring, and contemporary furniture add a modern contrast to the restored, ornate exterior façade. A refined color palette of warm grays accented by natural walnut and dashes of color bring a sense of tranquility and an elevated sophistication to the guest rooms. Custom carpeting, plush bedding, and upholstered seating evoke the design and comfort of a well-tailored suit. Large windows illuminate guest rooms with natural light, and rooms with original bay windows have a dramatic view of the bustling street scene below. 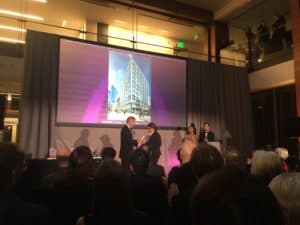 The Godfrey Hotel project involved the adaptive use of two historic buildings — the 1904 Amory and the 1908 Blake buildings — both significant examples of early 20th-century high style commercial buildings, originally designed by Architect Arthur H. Bowditch. The original designs were part of a series Bowditch designed on Washington Street including Old South Building, Jewelers Building, Washington‐Essex Building, and Paramount Theater. Both building’s façades retain most of their original character-defining features above the second floor, while the ground-level storefronts have compatible new interpretations.

The restoration and transformation contribute to Boston’s history and identity while looking to the future.

“Our team is proud to receive recognition for the Godfrey; an interesting blend of the past with all of the modern amenities expected of a boutique hotel. The project required a disciplined approach to balance high quality restoration with modern uses and practical issues of budget,” said Ellen Anselone, Principal, Finegold Alexander Architects.

Originally constructed within a few years of each other, the two buildings represent strikingly different stylistic approaches. The 6-story Amory is classical in style, with a finely detailed dentil and bracketed cornice, pedimented windows and a broken architrave at the entrance inscribed with the dates 1777-1904. The 11-story Blake represented a bolder progressive trend with faster elevators and a high-rise steel structure, which allowed for thin exterior piers and wide expanses of glass. The Blake also featured an unusual third and fourth floor with a series of projecting cast iron arched display windows. Clad in white terracotta, the building offered tenants abundant light, views and the latest in modern office amenities for its time.

To transform the buildings to their new use as a mixed-use complex featuring a branded hotel with an independent ground floor restaurant and coffee shop, numerous challenges were addressed including: integrating the two buildings into a unified whole on the interior, incorporating new MEP/FP systems, structural and seismic upgrades, exterior restoration and modernizing all aspects of the building’s interior while preserving its character. The terracotta façade, historic elevator lobby and stair were restored as part of the historic tax credit process.

Challenges involved integration of new MEP/FP for two completely different high‐rise structures. Additionally, each building had separate structural systems one was a combination of wood, cast iron, while the other was steel. Structural upgrades were significant, and the building had to be adapted for seismic and wind lateral force resisting system requirements. To solve the problem, two concrete shear walls were inserted throughout 11 floors of the building terminating 30 feet below grade.

Throughout the project, the team maintained the active T entrance in the base building on Temple Street.