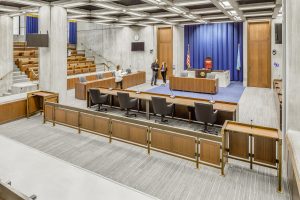 In each project, the designs involved creative interventions to achieve universal access while also respecting, restoring and transforming them for contemporary uses.

The councilors’ floor in City Hall was raised to be flush with the surrounding main floor level, allowing universal accessibility. Universal access was applied throughout the entire space including aisle width adjustments, altered seating arrangements to accommodate wheelchairs and companion seating, the addition of integrated accessible public lecterns, and an automated, accessible sit/stand podium for the council president, allowing for an adjustable height. The podium was designed to be aesthetically sensitive to the fabric and characteristics of Boston City Hall and to convey a sense of formality while being fully accessible.

The new lighting was designed in the spirit of the original lighting, by removing the surface-mounted fixtures from previous renovations and replacing them with recessed LED fixtures within the concrete grid that is a hallmark of Boston City Hall. 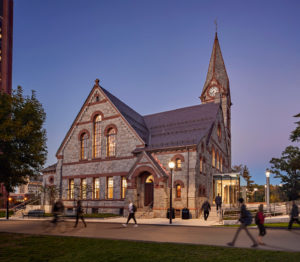 Listed on the National Register of Historic Places, the Old Chapel is a historic icon for UMASS Amherst.  Located in the heart of campus, along two pedestrian thoroughfares, it was especially important that the renovation was sensitively done to preserve the historic character while providing universal access to the facility,” states Jim Alexander, senior principal at Finegold Alexander.

The original building entry was completely inaccessible both inside and out as stairs were the only means to navigate level changes. To solve the problem the team designed a new main entry on the south elevation of the building and created an integrated landscaped ramp and terrace. The new glass entry allows the addition of a contemporary accessible entrance without disturbing the historic fabric. Inside, an elevator was discretely inserted to connect all three levels of the building. These design improvements allowed the building’s performance goals to be met while still preserving the distinctive features of the Old Chapel.  New energy efficient mechanical systems, windows, and insulation contributed to the LEED Gold certification.

In 2014, Finegold Alexander began the process of evaluating the Old Chapel for both restoration and rehabilitation. Preserve UMass, the Massachusetts Historic Commission, and the Amherst Accessibility Advisory Committee were all included in the overall process of determining what would be the best redesign and use of the building.

Additionally, new furnishings were designed to accommodate the desired aesthetic, while being accessible and technologically enabled. The work included the installation of new carpeting, replacement of the councilors’ desks, fabric drapery panels, and selective replacement of other movable furniture.