In June 2016, Barry Svigals retired from the Connecticut-based architecture firm he had founded 33 years earlier, leaving a distinct legacy of expressive sculptural artwork uniquely created for each commission. The question for Svigals + Partners, like many firms facing the departure of a visionary leader, was how to carry on a successful practice that was so deeply shaped and nurtured by the founder. Speaking with Svigals, along with Marissa Dione Mead, newly named director of art integration, and Julia McFadden, associate principal, we hear how they each found their commitment to a practice of architecture + art. 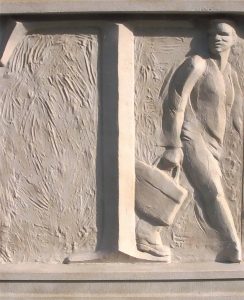 Figures walk amongst the letters that comprise the “University of Connecticut”/photo by Woodruff Brown.

After matriculating with his architecture degree from Yale University — and a three-year stint in a local firm — Svigals followed a bit of wanderlust to live in Paris for two years. Immediately captivated by the sculptures of Rodin, within weeks he found himself totally abandoning drawing buildings and focusing solely on human figures. Around him, the world of European architecture and its rich tradition of sculptural motifs gave him a “kick in the eye” — a Japanese Satori concept for awakening — which consequently motivated him to attend the Ecole des Beaux Arts to study sculpture in the most rigorous atelier. 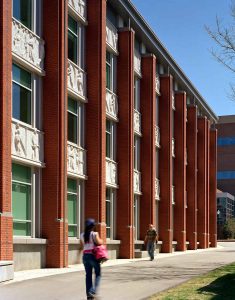 The experience was transformative — and upon returning to the U.S., the stripped-down work of typical architecture firms was starkly unsatisfying. He launched the firm with the idea to pursue both architecture and art, and an early commission for Boston College allowed him to put that integrative approach into practice. His sculpture mentor, Maurice Calka, happened to visit during construction when they were removing a mock-up of one of the 12 heads custom-designed for the building, and he exclaimed, “See, see! You miss it!” Calka’s mantra had always been that the art has to be an essential part of the architecture, not just applied, nor easily forgotten if removed. 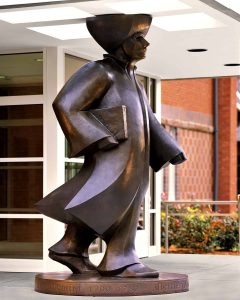 Subsequent commissions gave the firm multiple opportunities to explore the joyful and humanizing integration of sculptural figures into the expression of the architecture: from a bronze likeness of Albert the Great, to figures walking amongst the letters of the University of Connecticut.

Mead recounts childhood hours at her mother’s side, tinkering with bits and baubles — subsequently encouraged by her dad to pursue architecture at Notre Dame — and landing at Svigals where she resonated with the firm’s school commissions. She relished the community engagement process for a neighborhood school in New Haven, which spawned the idea for an expanded sidewalk utilized by food cart vendors. When a shopkeeper approached her to thank the team for this simple accommodation that added such a beautiful building to their neighborhood, Mead was struck by the ability of architecture to make people feel worthy and important — not just the inhabitants, but anyone and everyone on the street: the democratizing effect of public art.

What seemed like a career setback — she was laid off in 2010 — led to the opportunity to expand her design thinking. Joining the Kent Bloomer studio, Mead leveraged those early tinkering skills to learn detailing and fabrication techniques for custom ornamentation and public sculptures. Upon returning to Svigals in 2014, Mead aimed to expand the process of art ideation through collaborations with a variety of artists and artisans, as well as deepening the firm’s public engagement process. Reflecting on the firm’s recent pro bono project to create a memorial garden for victims of gun violence, she notes that you can’t go too far with inclusion. Her design for the centerpiece sculpture was inspired by the intimate relationships fostered with the mothers who shared their loss of loved ones. 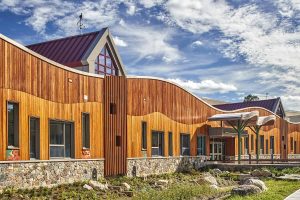 Footbridges cross the rain garden along the front of the new Sandy Hook School in Newtown, CT/Robert Benson Photography.

As the only girl in a ninth-grade woodshop class, McFadden designed and constructed a solid wood Parson’s table — but without encouragement, she didn’t pursue architecture in college. Instead, a major in theatre arts expanded her design repertoire to sets, costumes, and lighting. Returning to the University of Minnesota in her 30s to pursue a Master of Architecture, her thesis on Sacred Space and Place explored the idea that architecture can awaken and fulfill our human longing for spiritual connections with the landscape. 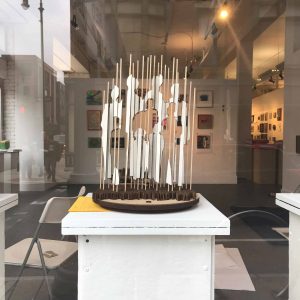 Mock-up of the “Generations” sculpture for a memorial garden to victims of gun violence./photo Svigals + Partners

After 10 years of practicing residential architecture in Minneapolis, the recession brought McFadden to Svigals in 2008. Formative experiences on large-scale school projects gave her the opportunity to explore the expression of the building and ground it in the geographic and social ecology of place. Following a study of the area’s watercourses, and the water-related definition of the “sandy hook,” McFadden rallied the design team for the Sandy Hook School commission to respond to water throughout the architectural expression. A rain garden spanning the entire front of the school collects roof run-off to ecologically filter it with native plants, while footbridges allow you to cross over it and enter into the safety of the school’s neighborhood-themed layout.

We are all looking for our place in the world. What these three share with others at Svigals + Partners is the commitment to utilize art as a reminder of our humanity. Architecture is the conversation we have with ourselves, with each other, and with the divine.