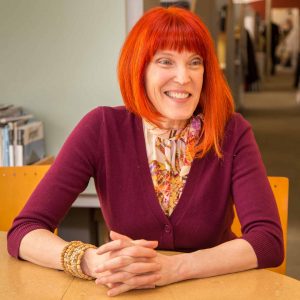 McFadden talked with Anastasia about how the team at Svigals + Partners ultimately found their voice after 30 years in business, and how their new way of thinking affected their approach to designing the new Sandy Hook Elementary School in Newtown, Connecticut.

With help from Fathom, a future design firm, the Svigals + Partners team developed their vision to “include a world of prosperous, compassionate communities.” That vision was inspired by the firm’s clients: developers, businesses, and nonprofits that really care about the work they’re doing and the communities they serve.

The result was a change in the way they engaged their clients and executed each project. They began each new project by putting everyone in a room together at one time to hear the different perspectives instead of the traditional approach of separating people and meeting with leaders first. The most profound discovery they made was that people were listening to, and developing connections with, each other.

It was this unique way of thinking that influenced the way the company approached the new Sandy Hook Elementary School that was completed in 2016. Because of the sensitivity and importance of the project, it was one that really demanded an environment where everyone involved had a chance to have their voice heard. “We were looking for a balanced approach,” says McFadden. Svigals + Partners “set the stage for the conversation, guiding discussions with community members.”

McFadden notes that the discussion “didn’t start with logistics, but instead started with the opportunity for community members to tell stories and get to know each other better,” which ultimately gave way to some forward-thinking ideas including creating elements of the new design that also addressed concerns about school security.

McFadden feels that much of how the team at Svigals + Partners approaches a project really centers around that inherent desire for connection that all humans experience, and “realizing that there are aspects of understanding ourselves that have to do with being in relationships with others,” and they try to apply that to every job they take on. This includes incorporating biophilic design to connect people back to nature and creating common areas “that encourage and support connection” between coworkers or members of a community.

McFadden concludes that, “If we can find ways to enhance those spaces in between spaces that allow us to connect with each other, we’re all going to feel a lot healthier.”