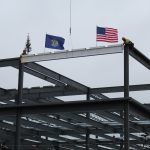 Augusta, ME –   Landry/French Construction reached a milestone on the new 104,000sf office building for the Maine Department of Health and Human Services in Augusta.   On Thursday, March 8th, construction crews placed the final steel beam, marking the symbolic completion of the structural phase of the building.

Landry/French also marked another milestone on a second office building being built simultaneously on the site. Steel erection for the 26,000sf Maine Public Employees Retirement System (PERS) building began last week and is expected to continue for the next several weeks.

The two projects are employing over a hundred Maine subcontractors. Both buildings are scheduled to be complete in early 2019. 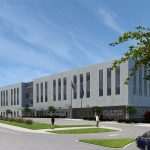 Construction on the project started in November. Despite the bitter cold and snow in December and January, as well as the tight labor market, the project has progressed extremely well and is weeks ahead of schedule.

Located on the former Maine Department of Transportation site just two blocks from the State Capitol in Augusta, the buildings are the first major addition to the State House complex since the 1970s.  The two buildings are being developed by Virginia-based developer FD Stonewater and will be leased back to the State.