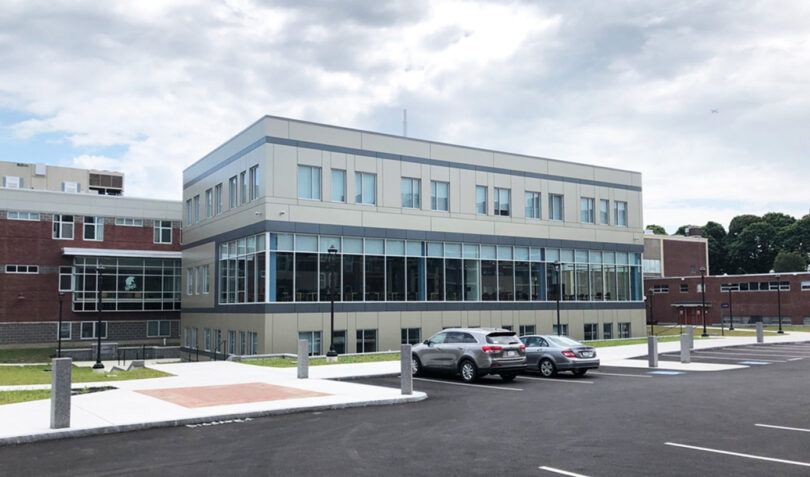 Lynn, MA – The project design team is executing the final phase of the building futures project at St. Mary’s High School in Lynn.

When completed, the design will knit together three separate existing campus buildings, creating a single interconnected school. The new open space(s) will be the first true campus to serve the St. Mary’s School in its 137-year history.

The multi-phase project, master-planned and designed by CBT Architects, began with the demolition of a 2-story chapel and annex building along with its connected utilities. The first phase was steam to hot water conversion of the heating system. The second phase was the demolition of a chapel and annex building and the boiler plant. This made way for the new 30,000sf state-of-the-art STEM/Gateway building which opened in November of 2020. 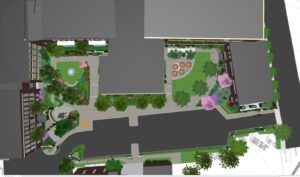 Allen & Major Associates, Inc. provided full site design and civil engineering solutions for ADA accessible routes throughout the campus, including updates to the existing stormwater systems, reconfiguration of parking areas, and updates to site lighting. Work included multiple field investigations to resolve conflicts with existing utilities, which required coordination with the Lynn Water and Sewer Department as well as the on-site contractor.

In the final phase of the project, Chelgren & Associates, in collaboration with Radner Design Associates, is overseeing the implementation and construction of the extensive landscape architecture design for the new school campus. The campus design is comprised of three parts: a student center, a contemplative garden, and a central walkway that serves as a functional and ceremonial space. The student center contains an outdoor dining plaza and a grassed amphitheater designed to host outdoor classrooms, performances, and movies projected on an adjacent, 3-story wall.

The contemplative garden is anchored on one side by a grotto that contains a classic Greek temple which will house a granite statue of the Virgin Mary and child and on the other side a fountain with a circular sitting wall. Finally, the main pedestrian walkway, dubbed as the Great Hall, functions to allow a large number of students to move from the parking lot into the school as well as a central ceremonial space which, when combined with the adjacent parking lot, is capable of hosting large functions such as graduation ceremonies.

“The inspiration for the design was to create lush horticultural spaces that stand in stark contrast to the surrounding urban center,” said Jeff Chelgren of Chelgren Associates. “St. Mary’s Administration envisioned an arboretum-like environment surrounded by the historical Archdiocese buildings dating back to the early twentieth century.”