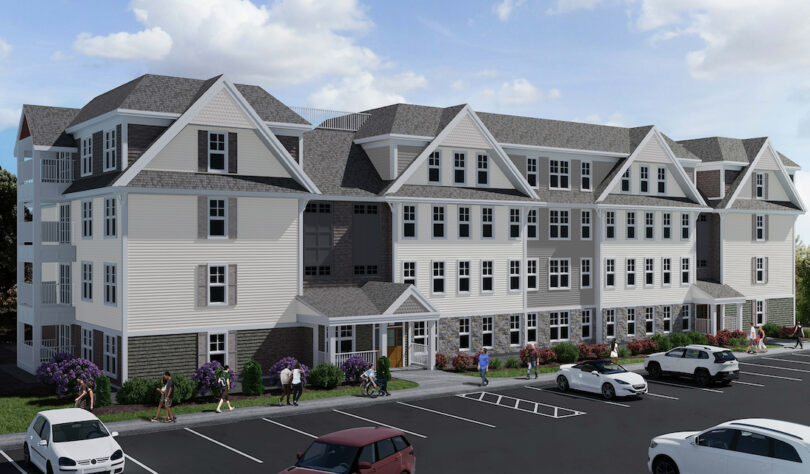 Wareham, MA – Woodland Cove, a new community located minutes from the Cape Cod bridges, moved one step closer to welcoming new residents with the closing of its final phase of financing.

The 150-unit property on Route 6 in Wareham will feature affordable and workforce housing for local residents earning between 30% and 80% of the Area Median Income (AMI). Potential residents will be eligible to participate in a lottery drawing.

Dakota Partners secured Phase 2 financing last fall and closed in June 2022. Phase 1 closed in October 2021 and Phase 3 closed in January 2022 on the approximately $54 million project, which is being financed through a combination of state and federal funding programs.

The completed project will feature 27 one-bedroom, 106 two-bedroom, and 17 three-bedroom residences. Sixty-three of the units will be affordable rentals. Phases 1 and 2 feature 63 units each, while Phase 3 consists of 24 units along with a clubhouse building that features a fitness center, community room, patio, offices, and restrooms, along with other public and operational spaces. Woodland Cove expects to welcome residents beginning in winter 2023.

The community, one of the largest in Wareham, is located on the site of the former Starlight Motel on Route 6 (Cranberry Highway). Construction of Phases 1 and 3 is underway with completion expected in winter 2023. Phase 2 includes the demolition of the existing hotel building. After demolition of the existing building is complete, earthwork construction on the foundations begins in August.

Dakota Partners is also serving as the general contractor on the project. As with the majority of Dakota Partners’ projects, Woodland Cove is being designed and built according to energy-efficient Passive House standards.

Financing for Woodland Cove was secured through a combination of state and federal low-income housing tax credits (LIHTC), soft debt financing (HOME, HSF and AHTF) from the Department of Housing and Community Development (DHCD), and workforce and first mortgage debt from MassHousing.

The architect for Woodland Cove is Ed Wojcik Architect, Ltd, and the management agent is Maloney Properties.