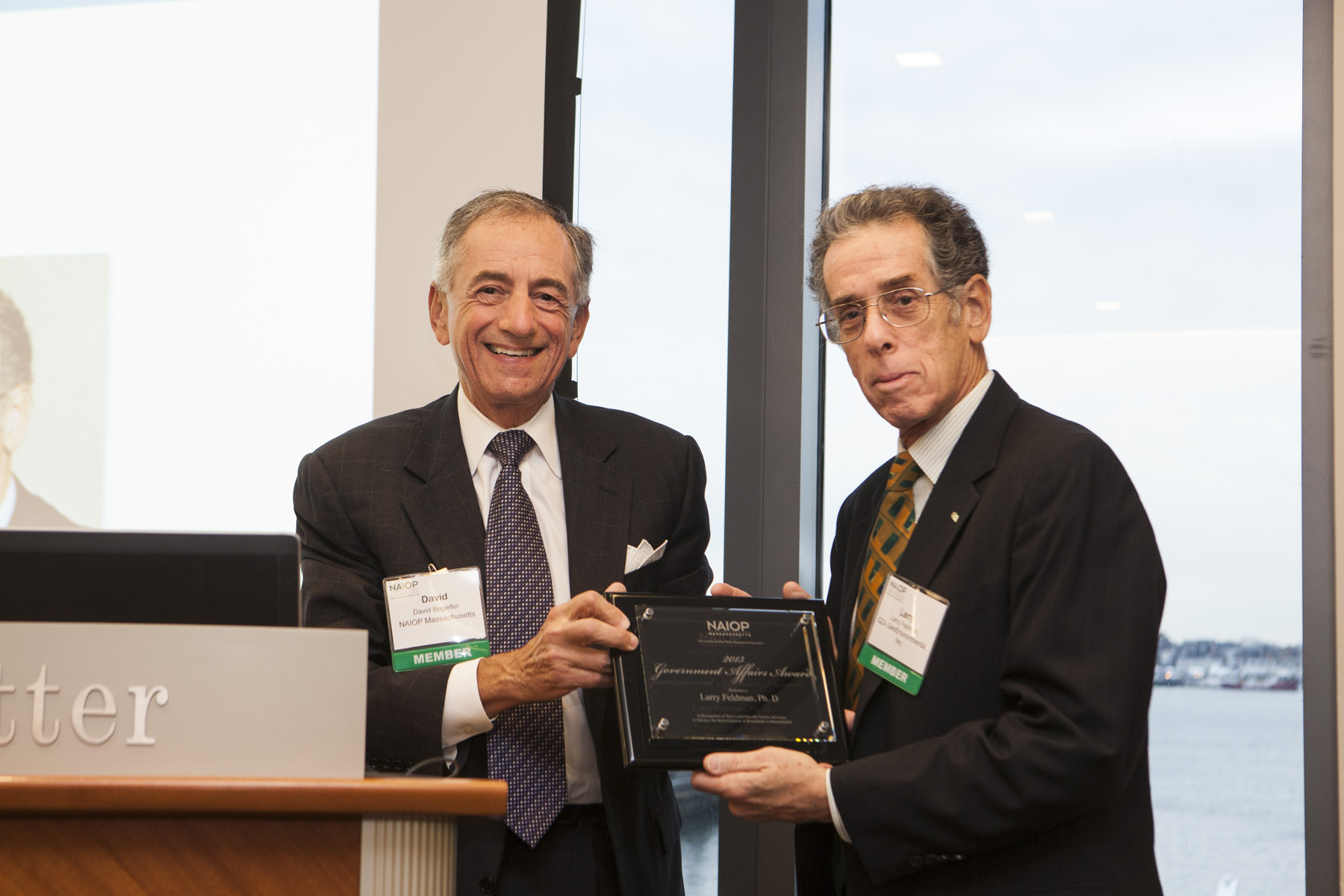 Norwood, Mass – Larry Feldman, senior principal at GZA GeoEnvironmental, Inc., was named recipient of NAIOP Massachusetts’ 2013 Government Affairs Award at the organization’s annual meeting in December.  The award was granted in recognition of his contributions to the development of the Commonwealth’s hazardous waste site laws, regulations and policies.

NAIOP Massachusetts, the Commercial Real Estate Development Association, is the leading organization for developers, owners and related professionals in office, industrial and mixed-use real estate. The organization advocates for the commercial real estate industry by suggesting innovative approaches to simplify the regulatory process, promote privatization of select governmental functions, and improve the overall economic competitiveness of the Commonwealth.

Feldman was instrumental in the creation of the Commonwealth’s privatized cleanup program in 1992, and was an integral part of the committee that established the regulations and guidelines governing the first-in-the-nation privatized system. He was an original member of the LSP Board of Registration, which licenses environmental consultants and disciplines those who violate the standards of the profession, and is also a founding member of the LSPA. He served on the organization’s board from 2004 to 2008, including a term as president. In October, he was awarded the LSPA’s first lifetime achievement award in recognition of the work he done to advance the profession and promote brownfields cleanup in the Commonwealth.

Feldman, who joined GZA in 1979, specializes primarily in the assessment and remediation of sites contaminated by oil and/or hazardous material, and on providing litigation support in cases involving such sites.  He has written and spoken often on a variety of environmental issues, including the redevelopment of urban sites and the relevance of site assessments to the legal and real estate communities.

Feldman has achieved numerous industry distinctions. Besides his tenure on the LSP Board of Registration, he currently sits on MassDEP’s Hazardous Waste Site Cleanup Advisory Committee, and in the past has served as a Governor’s Appointee to the Water Resources Management Act Advisory Committee and the Massachusetts Water Resources Commission, and as an appointee to the Massachusetts Brownfields Advisory Committee. He has also served for many years as co-chair of the Massachusetts Chapter of NAIOP’s 21E Subcommittee, and is a past recipient of NAIOP’s annual Public Affairs Award.  He is an associate member of the Boston Bar Association and sits on the Board of EnvironMentors, a Washington, DC-based organization committed to mentoring underserved high school students in environmental sciences and stewardship.

“We congratulate Larry for his contribution to the development of statewide hazardous waste site laws, regulations and policies,” said William Hadge, President and CEO of GZA GeoEnvironmental, Inc. “His commitment to identifying and remediating hazardous waste sites in Massachusetts has brought great value to the commercial real estate industry. Larry has been a great resource for our clients and we congratulate him on receiving this prestigious award from the NAIOP MA.”