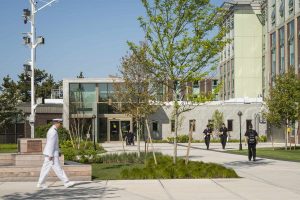 In 2012, the Massachusetts Maritime Academy (MMA) had a good problem to solve — its programs were growing, and in turn, its residence halls needed to grow with it. However, unlike a typical campus, MMA has a unique lifestyle and a very restricted site. Adding capacity wasn’t going to be as easy as building a new dorm.

Prellwitz Chilinski Associates (PCA) was hired by MMA and the Massachusetts State College Building Authority (MSCBA) to add 300 beds to the housing complex and, in the process, upgrade amenities while keeping the culture of the campus the same. To most, this would seem like a contradictory mission, but for this particular campus, it was the continuation of an ongoing puzzle to solve.

For over 100 years, the Massachusetts Maritime Academy has been preparing women and men for careers on land and on sea. As the nation’s finest coed maritime college, MMA challenges student to succeed by balancing a unique regimented lifestyle with a typical four-year college environment. The MMA lifestyle organizes students into companies managed by officers who ensure that students adhere to rules of conduct. To accommodate this culture, the various companies are housed in interconnected buildings where every room is the same. There are no perks, no senior suites — just a sea of regularity which keeps them organized and efficient. The lifestyle they learn on land they also keep at sea as a tight-knit community

Dramatically sited on a peninsula jutting out into Buzzards Bay along Massachusetts’ Cape Cod Canal, the campus is bounded on three sides by water. Due to ever-evolving flood zone regulations, their tiny campus was shrinking as buildable area decreased with every new flood map. With limited room to grow out and enrollment increasing yearly, creative solutions were required to make the most of existing spaces and opportunities.

Objectives – The program MMA stated was clear — add a minimum of 300 beds to the 1,075-bed complex, upgrade all the restrooms, and look at student amenity spaces. That was where PCA was to start. A year-and-a-half into the project, the academy added an upgrade of its mess deck (dining hall) — which was attached to the residence hall complex — to the scope. At that time, the program shifted to add 200 seats to the dining hall, increase serving space, create a separate 100-seat dining destination within the complex, and create office areas for Residential Life and Health Services.

Although the program need was clear, PCA pushed the academy to look beyond programs and think about what it wanted for the campus and the students. How did the complex fit into the campus as a whole? What amenities did students need, and how could providing them foster community and still work with the regimented lifestyle? How could you change something while keeping it the same?

Along with the program challenges there were intense schedule and budget guidelines — get it built as quickly as possible, keep all the buildings open throughout the academic year, keep five out of six of the buildings open during the summer, create a study that sets the budget for the project, and then stick to it even when the scope is changed.

Implementation – PCA began by documenting the current uses in the seven-building interconnected complex and meeting with the academy to discuss short-term and long-term needs. The complex was made up of six residential buildings and one dining hall/student center building. All were interconnected on the ground floor, with only three of the six residence halls connected at upper floors. The existing program was varied. Since the campus was small, the ground floor had become a mix of uses with offices, classrooms, lounges, and residential spaces littered throughout the maze of corridors. The goal was to reorganize the ground floor and consolidate the uses to create a true student-centered core where people could gather, while also dispersing lounges into the upper levels for added community space.

These added student amenities would create a problem for the team. Since all the upper levels were used as cadet rooms, every bed converted to a lounge meant that another bed had to be added elsewhere. It quickly pushed the 300-bed need upwards.

So “up” the team went. PCA recreated the success it had found in 2006 when it added 200 beds to the buildings by adding two stories on top of the existing residence halls. The decision was made to build over the Company 4 building and add a six-story wing onto the north side of the building jutting into the rear courtyard. Constructability of this option had its challenges, but the reward was a footprint that could mimic the existing building. It would keep the students together in one space and expand the lifestyle they loved while improving it.

The balance of the residential program would consist of reorganizing and renovating the other five company buildings. This work would add beds by shifting uses and converting existing double rooms to triple rooms for freshmen. The dining/student center scope would involve two additions and a full gut renovation of many of the spaces in order to reconfigure them for new uses.

Along with the internal program, the team reviewed the site and pushed to reinvent the front door for the buildings. In response to the campus master plan prepared by Sasaki, the residential complex was meant to be the end node to a future pedestrian boulevard for the campus. PCA partnered with Copley Wolff landscape architects to redesign the pedestrian circulation from the mess deck to the library by crafting wide boulevards suitable for marching cadets while creating softened edges and spaces for gathering. The mess deck addition would do double duty, with the new patio and walkways designed to accommodate commencement ceremonies that could use the new building as a backdrop.

All aspects of this project were explored in the initial study. The team partnered with engineers AKF for MEP engineering, Odeh Engineers for structural, and Baxter Nye for civil engineering to understand the infrastructure needs and possibilities. Together they developed a phasing plan that would be accomplished over the next three years at a cost of over $40 million.

Five of the eight phases were designed to be executable in the 10-week summer and winter breaks and cost between $1.5 million and $3.5 million each. Three of the phases involved additions to the existing complex, ranging from 2,000sf to 39,000sf and cost between $5 million and $22 million. These phases spanned beyond the typical 10-week summer slammer time frame. However, the buildings always remained occupied during construction. All work was designed so that the existing buildings could remain open while work on the additions continued around them. This required careful coordination with the construction manager, Shawmut Design & Construction. At times, up to four phases were being implemented concurrently over the three-year time span, with pieces of the complex being turned over to the school every few months.

Execution – Recent graduates can’t believe the transformation in the few short years. It doesn’t look like the old space, but it still feels like MMA. By keeping what worked on campus and retaining the consistency needed for their regimented lifestyle, the team kept the spirit of MMA. Adding and upgrading student gathering spaces to the complex made the campus a place that students now love to hang out in even when they are off-duty.

The existing buildings were a sea of beige CMU walls and VCT floors in a monotonous maze of corridors. The new complex enlivens the spaces by adding color and texture to the corridors with gradated flooring and wall treatments to add pattern. Oversized number signs were added to help students and visitors navigate through the companies.

Lounges were previously dark and closed-in, located on the first floor with few cadet rooms around them. The new locations at the ends of the upper floor corridors take advantage of the water views and the large glass at the corridor ends. By opening them up to the hallways, the spaces feel larger and airier. With flexible seating, the lounges can be configured for study groups or for watching TV with friends.

The previous restrooms were worn and dark. The new configurations are efficient, and although not spacious, they provide the efficiency the students need to be ready in time for morning formation each day. The finishes are meant to stay simple and durable while providing a splash of color with deep-blue and -green tiled walls.

The ground floor was upgraded and reconfigured to add additional beds, fostering more of a community and consolidating all the main amenity space along the central spine leading to the dining hall. This new boardwalk — designed to feel like a walk along the pier, with its blue wave storage bays, sea-blue color palette and wood-look tile floor — creates a true student activity zone along the main connector leading to the mess deck.

Watery themes were played up on the finishes on a campus that truly loves the sea. With their largest classroom building being the TSS Kennedy training ship docked along the south edge of campus, these students have a real passion for this school. PCA and their team were able to accommodate MMA’s students’ unique needs, preserving their heritage and giving them a space they want to call home.

In the end, the project was delivered on time and under budget in December 2015. It has created a complex worthy of the academy’s mission and given them something they can be proud of. With the school’s enrollment continuing to grow, this work positions MMA to continue its success well into the future.