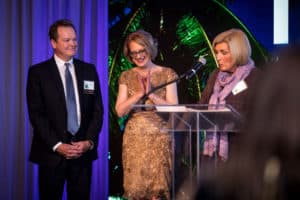 Hopkinton, MA – Solect Energy announced that its CEO, Ken Driscoll, has been honored by IMPACT Melanoma with its Keeper of the Hope Award.

The award was presented at IMPACT Melanoma’s 2018 Shades of Hope Gala which took place on Friday, Nov. 16th at the Four Seasons Hotel in Boston. Driscoll was lauded for his contributions to IMPACT Melanoma and for the leadership role Solect has taken in educating its workers and partners about respecting the power of the sun.

The Keeper of the Hope Award is presented to a member of its IMPACT community whose generosity, vision and commitment to the organization over time is unwavering. The award is given in honor of Suzanne Donahue, a young woman who lost her battle with melanoma at age 37.