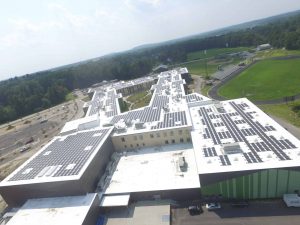 Dover, NH – In a PPA solar project between ReVision Energy of Brentwood and the city of Dover, Ayer Electric, Inc., based in Barrington, has provided the installation of the 913kW rooftop solar system at Dover High School.

Ayer Electric’s team of 24 IBEW Local 490 electricians, headed by project manager Marc Wiemer, commenced work in February and completed the project in June.  At the outset of the project, the NECA contractor worked through harsh winter conditions in order to meet the project scope and timeline.

The new solar system is designed to produce an estimated 1.5 million kWh of solar electricity annually, approximately 40% of the school’s power usage.