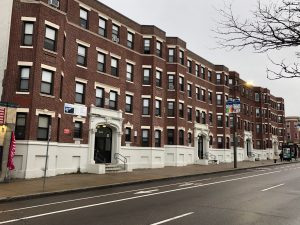 Prior to involving Abbot, the owner contracted with an architectural/engineering firm (Thompson & Lichtner, Canton, Mass.) to survey the properties, identify deficiencies, and develop a set of remediation plans.

Due to the large scope of the project, Abbot called on its in depth masonry repair expertise to address the multitude of issues in the repair plan.  Those included repointing defective mortar joints, cutting out and caulking vertical expansion joints and perimeter of the windows, replacing deteriorated brick to match the original brick, and power washing and applying water repellent to all brick surfaces.