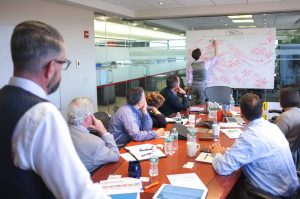 In the A/E/C industry, the results of planning, hard work, and follow-through are immediately evident in the work that is produced. The success of any business in this space has much to do with its ability to create a tangible product: an office building, multifamily residence, or school, to name a few, but it is the intangible that likely plays a greater role in a company’s ability to grow, evolve, and succeed in an industry that often depends on the strength of relationships to get things done.

Brent Robertson, partner at Fathom, a future design firm helping manufacturers, architects, builders, and engineers go beneath the surface to reconnect people with what gives their work meaning and drives unprecedented performance, says that most often the biggest mistake a company or organization makes is “putting too much energy into reacting to the symptoms they are experiencing like falling margins, flaccid employee engagement, and commoditization, while still hoping for growth, expansion, and increased profitability.” He says they often react by “investing in some new ‘thing’ like a new website, employee engagement program, or new process or team, hoping for a silver bullet.” But these “things” almost always fail to make the difference because none of them are designed to address the underlying condition causing the symptom. 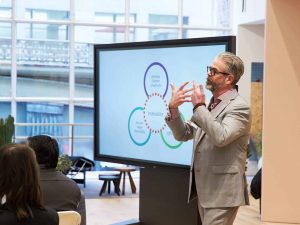 Brent Robertson facilitates a recent executive workshop on creating meaningful profitability for 2019 for 80 leaders of A+E firms at the Haworth Showroom in NYC. / photo by Edward Caruso

Fathom’s main objective is to help organizations establish a clear vision for the future, help them realize their full potential, and put into action the goals and causes that will grow their businesses and positively influence the world around them. They do this by focusing on building and strengthening relationships and helping people better relate to each other and their work. According to Robertson, “We help our clients focus on the relationships most vital to their success, identify them, understand their condition, and ultimately develop them to be more meaningful and productive.” 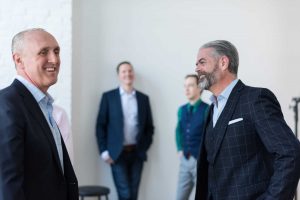 Matt Reiniger, associate partner at Fathom, says, “Fathom works with companies to understand what a successful future looks like, and what it will take to create conditions that will have it be true. That involves acting in ways that build authentic cultures that invite contribution, and have teams trust each other. It also involves elevating the state of relationships with clients and partners – so they see you as essential to their future.”

It is for this reason that companies like Tecton Architects, Svigals+Partners, and Fuss & O’Neill have chosen to work with Fathom to take deep dives into their own companies and streamline their own visions. 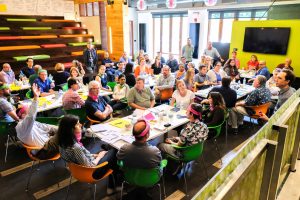 Employees of Tecton Architects gather in the Trinity College Vernon Social Center, a space they designed, to play a part in creating the firm’s future. / photo courtesy of Fathom

Fathom worked with the team at Tecton Architects to better engage and empower their employees, creating a “whole team” approach. This has inspired the firm’s bold new approach to their work. Melissa Roy, associate and director of business development at Tecton Architects, says: “Designing and holding the space for our own potential has pushed us to find new ways of doing, thinking, and interacting as we work together to meet the needs we know and awaken hidden opportunities. This has pushed us to challenge traditional choices and take more risks with greater confidence, which has translated into getting the work that we want.” 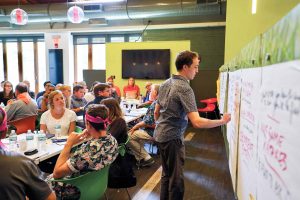 Matt Reiniger, associate partner at Fathom, records and reflects to the Tecton Architects team a collective image of the future. / photo courtesy of Fathom

Robertson also believes that, although often a taboo subject in the design and construction industry, profitability can and should be high on a company’s list of goals. He says: “What we at Fathom have demonstrated is that there are cultural attributes that, if established and cultivated within an organization, the ability to create profit increases, in many cases, dramatically and at the same time, strengthens relationships between the members of the firm, and their relationships with clients, partners, and the marketplace itself.”

This was true for the team at Svigals+Partners, who recently saw their most profitable year in their 35 years of business after working with Fathom. Barry Svigals, partner emeritus at Svigals+Partners, says: “What we needed and what we got from working with Fathom was not a blueprint for an extrapolation of the present. We were schooled in a capacity to imagine and re-imagine our future. Most importantly, it was a future that we cared deeply about, and one that has continued to motivate all of our endeavors.” 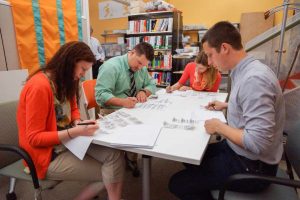 The team at Fuss & O’Neill worked with Fathom to identify and define the company’s culture, and the firm has grown by 20% since implementing its vision. According to Kathy Nanowski, CPSM, vice president and director of marketing and business development at Fuss & O’Neill: “Fathom facilitated a discovery session that brought to light the fact that it is important to our employees that we work on projects that make a difference in the communities in which we live and work. Engineers and scientists want to work at a firm that values and appreciates them, not only by providing good benefits and salaries, but by having them work with clients who challenge them. As a result, we look for projects that will truly benefit a community or organization – exciting projects that keep people engaged. “ 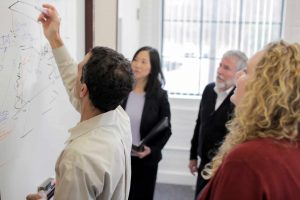 In January of this year, Fathom also helped the team at High-Profile Monthly clearly define our vision to “provoke people to act on their vision to build a better world.” So far, that vision has led our commitment to be a platform where our readers can engage with the people and companies that are changing the industry for the better, starting with our brand new Build Better Podcast and HP’s first ever Vision issue.

Reiniger says the most rewarding transformation he sees in companies they work with is “people trusting each other more and more, and then seeing the amazing things that come out of that trust,” and Ben Callaghan, associate partner at Fathom, considers Fathom’s role for companies to be that of “guides, facilitators, coaches, designers, communicators, conveners, instigators, and overall unwavering advocates for our clients’ potential.” 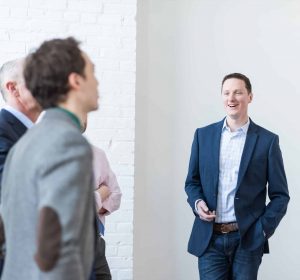 So what is Fathom’s own vision? According to Robertson: “It is a world where people and organizations use more of their humanity to serve more of humanity. We believe that people have the infinite capacity to contribute to what matters to them, and have proven that unprecedented business performance can be realized when every member is acting together on behalf of a future bigger than they are. We are on a mission to create as many examples as we can, so a new standard for organizational design is embraced.”