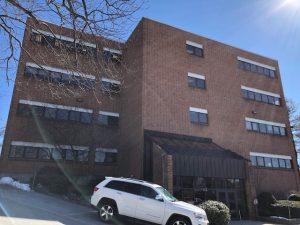 The 27,000sf building overlooking Route 95 was purchased last year in order to bring Delphi’s northern operations along with those of sister company, Properties, Inc., together under one roof. An expansion and renovation of the company’s Cape Cod offices in Mashpee was completed over the summer.

Delphi executive chairman and CEO, Jake Simmons, commented, “I think I speak for the entire team when I say that, thanks to the outstanding design work of Davis Square Architects, this new facility is both visually impressive and highly functional.” 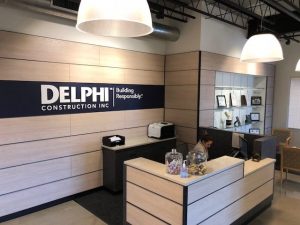 With a postmodern Industrial design, the space features exposed metal ceilings and black steel beams complemented by polished concrete floors. Most of the 18 management offices, located around the windowed perimeter of the building, feature floor-to-ceiling-height glass walls.

This design consideration allows a tremendous amount of natural light to infiltrate the building and offers virtually unobstructed window views, even to those workstations towards the interior of the space.

The most recent renovations comprise nearly 7,000sf and includes offices, cubicle banks, workrooms, and three conference rooms: Inman, Weston, and Overland. Each is named in honor of past street addresses where Delphi has held offices over its 25-plus-year history in business. 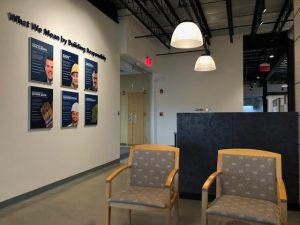 Delphi plans future expansions and renovations within the building to correspond with growth.

While the conference room names may give a nod to Delphi’s history, the technology within them is nothing short of futuristic. Delphi’s Ken Brooks, who oversaw the dramatic IT infrastructure improvements made as part of the project, called attention to the state-of-the-art technology in the Inman conference room as being particularly noteworthy.

“It may be tempting to call these systems ‘A/V,’ but that wouldn’t come close to doing the technology justice. The installed systems include a precisely tuned array of microphones and speakers in the ceiling along with an integrated, self-panning, self-zooming camera that dynamically responds and zeroes in on the current active speaker in any meeting,” said Brooks.

“We are able to create a high-tech virtual conference room experience for remote meeting guests. This is highly efficient for our teams in the field who may be on any jobsite throughout the region. This technology allows them to virtually attend in a way that is almost as good as being here,” Brooks said.

“We are thrilled to have all of our Waltham staff, including our construction operations and estimating/preconstruction teams all together in one location. I am confident that the synergy created by this move will bring additional benefit to our clients,” added Simmons.