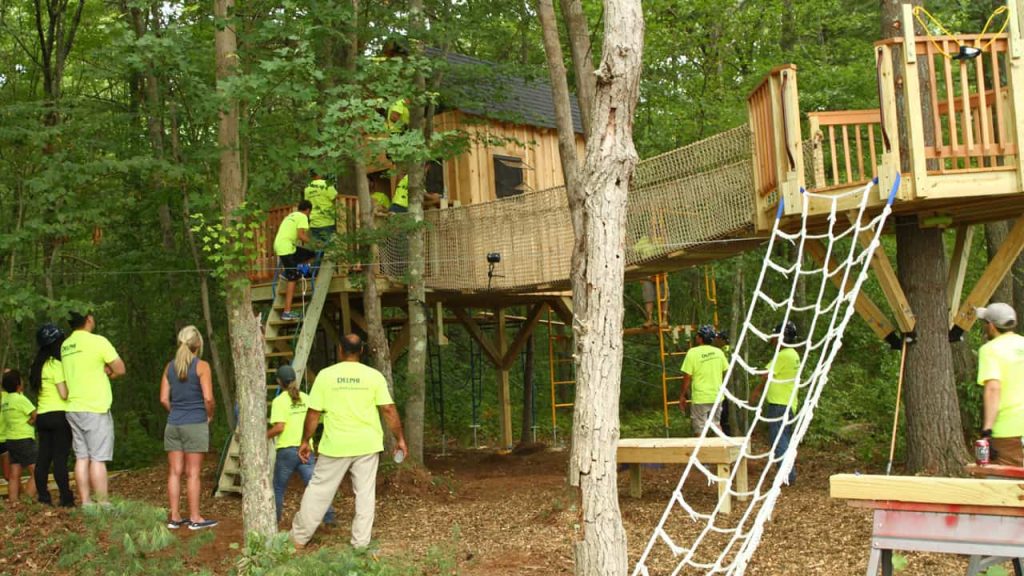 Waltham, MA – Charitable giving has been part of Delphi Construction’s corporate citizenship since the company got started in 1992. This year, the multimarket construction management firm out of Waltham had the opportunity to take its support for good causes beyond the financial to the practical when Make-a-Wish of Massachusetts and Rhode Island invited Delphi to design and build a dream treehouse for a seriously ill, nine-year-old boy named Connor.

Delphi CEO, Jake Simmons, enthusiastically accepted the invitation not only because it was a worthy cause but also because it fit perfectly with his desire to make his company’s charitable efforts more personal. “Writing checks is important and something we will continue to do, but I had been looking for creative ways to get my entire 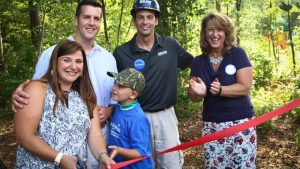 Connor with mom and dad; Jake Simmons, CEO Delphi; and Laura LeTourneau, director of development for Make-a-Wish Mass. and R.I.

team involved in our charity outreach. Building a treehouse with Make-a-Wish gave us the opportunity to do good by doing what we do best.”

The project, dubbed “Build Connor’s Tree House,” involved the participation of nearly 50 of Delphi’s 70-plus full-time employees. Volunteer crews built components of the massive structure ahead of time in the parking lot of Delphi’s Waltham office so that Connor would not see the work in progress. They trucked the pieces in for build day, which was scheduled for a time when the family would be out of the house for the day. 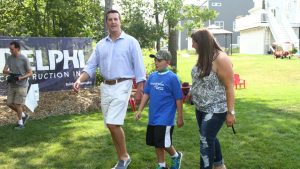 Connor’s afternoon arrival back home. While perhaps not as complex as the assisted living facilities, hospitals, and banks that the company typically builds, the treehouse project had a long list of requirements dreamed up by the nine-year-old client, including: a multilevel indoor/outdoor space, climbing course, target practice area, and drawbridge, along with a separate zipline platform.

Simmons said that working to meet the tight deadline was well worth it when he and his team got to see Connor’s reaction upon seeing the new addition to his back yard. Family friends and neighbors, along with Make-a-Wish representatives and the local media, were all on hand to witness the big reveal and the emotional ribbon-cutting ceremony that followed.

Simmons said that partnering in this way was as rewarding for his organization as it was for the family. “The unexpected part of being involved with a physical charity outreach was the profound impact it would have on our employees. Without exception, everyone involved said the experience was extremely rewarding and further solidified our sense of team spirit. I would encourage my fellow business leaders to seek out similar opportunities to bring the special skills within their organization to bear for the benefit of charity. Make-a-Wish is one fantastic organization to partner with, but there are many other areas of need where together we can make a difference.”