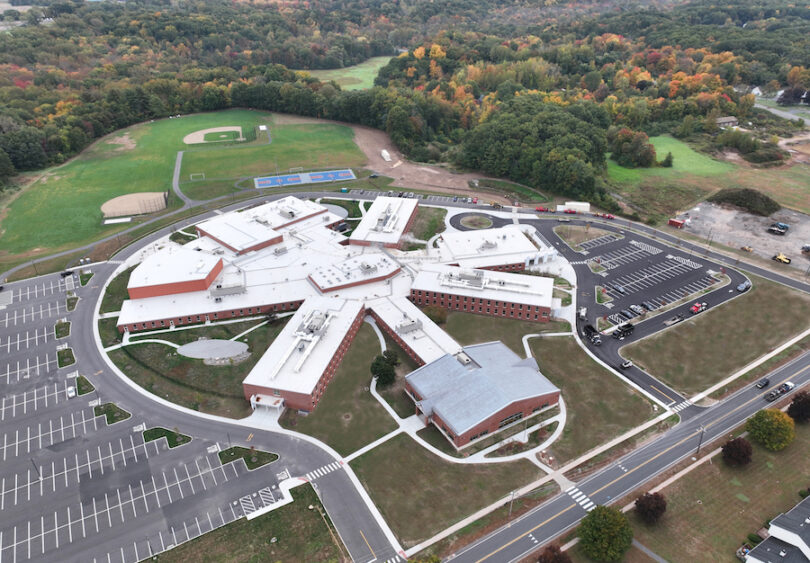 When the John F. Kennedy Middle School opened this fall to greet students and faculty after a nearly two-year renovation, the original building, constructed in 1969, was literally just a shell of its old self. Renovations and new construction transformed the over 50-year-old building into a cohesive series of state-of-the-art learning spaces featuring universal access and deep flexibility. With updated systems to provide comfort, efficiency and resiliency, the “new-old” school will serve the Enfield community for decades to come.

As a “Renovate-as-New” status with the State of Connecticut, the project encompassed a full renovation of the entire original building and all its MEP systems. An 18,610sf auditorium addition on the northeast portion of the building created a new public entry to the community-use spaces, bringing the overall renovations and addition to 198,000sf. 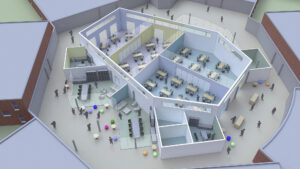 The lack of swing spaces throughout the town of Enfield was a major driver of design and phasing. Since no buildings were available to accommodate a large student population, the school would remain occupied throughout the renovation. Swing spaces were established within the school (cafeteria and media center) to allow students and faculty to occupy parts of the building while construction took place in dedicated wings. The auditorium was temporarily modified as a food serving space.

One of our first priorities was to replace the heating plant, which was out of service when the project started, running on temporary boilers situated outside the building. This setup allowed the modernization of the boiler room with new high efficiency boilers with minimum interruption. A phased approach to maintaining electrical service centered on creating a new electrical room in the building addition and switching over wing-by-wing to new service as construction proceeded.

The “hub and spoke” configuration of the school helped with phased construction. The hub, however, where all school traffic flowed throughout construction, required multiple approaches, modified after each phase, to keep all MEP systems operational while allowing safe access to all parts of the school.

Specifying and installing systems into a 1960s building that was not designed to accommodate current ventilation rates and air conditioning can often prove challenging. Dedicated outdoor air units coupled with variable refrigerant flow terminal units were utilized in classrooms wings. We installed major, durable (phenolic pre-insulated) ductwork runs on the roof. Interior design of the classrooms benefited from that approach, allowing the restoration of clerestory windows in corridor walls, which was highly valued by staff and students. 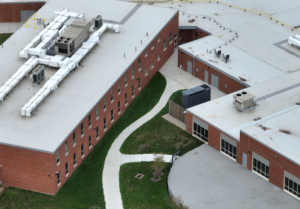 The project was designed and constructed in accordance with state-mandated High Performance (Green) Building Standards. The MEP design focused on reduced energy use, air quality and acoustic management. Collaboration with Eversource to apply incentive programs allowed for installation of very efficient lighting and HVAC systems and controls.

Cooperation with the team and stakeholders from the beginning of design and highly detailed phasing plans played a critical role in delivering the project on time. Prior project experience in Enfield, along with decades of experience working with JCJ Architecture, CSG (owner’s CA) and Gilbane (CMR) helped expedite the approval process with the Office of School Construction Grants and Review, as well as with the town’s building committee and local town inspectors and fire marshals.

With the school’s official dedication ceremony on the near horizon, we look forward to celebrating the success of this project knowing that this state-of-the-art school will provide an amazing place for teachers, students and the town of Enfield well into the 21st century. 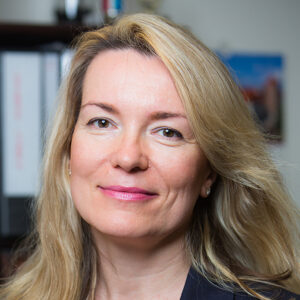