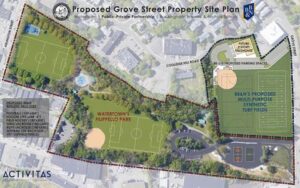 BB&N plans to use the site for athletic purposes, and will build two athletic fields, a field house, and about 80 parking spaces on the land that will be accessible to both the school and the town of Watertown. First Republic Bank purchased the bond.

“The new athletic fields that Buckingham Browne & Nichols School plans to build will enhance its educational offerings for students and create open space for nearby residents,” said secretary of housing and economic development Mike Kennealy, who serves as chair of MassDevelopment’s board of directors.