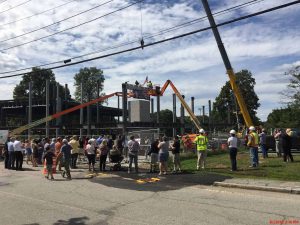 Weymouth, MA –  CTA Construction Managers joined elected officials, Tufts Library leaders, The Mass Board of Library Commissioners, and the public to mark the official steel topping off of the new 50,000sf library located on Broad Street in Weymouth.

The new library, which will feature a greatly expanded children’s literature department, several community meeting rooms, innovative technological advancements, and an outdoor amphitheater, will replace the current facility, which is over 50 years old.

In addition, the new facility will feature open reading areas, study rooms, a local history center and a media lab capable of supporting computer modeling and advanced audio-visual projects. It will also feature free wireless internet and upgraded computers for public use.

The project is a cooperative venture between the town of Weymouth and the Massachusetts Public Library Construction Program, which awarded Weymouth over $12 million for the construction of a new library.

The library is expected to be completed in the summer of 2020.