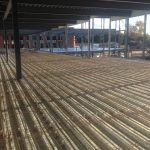 Holden, MA – CTA Construction of Waltham recently broke ground on the new Mountview Middle School in Holden, a two-phase project that includes construction of a new middle school and demolition of the nearly 50-year-old existing school. CTA recently was named on a list of the Top 100 Green Building Contractors.

The construction project is participating in the Massachusetts Collaborative for High Performance Schools, which sets standards for environmentally friendly design and construction. For this reason, all the classrooms are located on the perimeter of the building to allow access to natural daylight.

The $35.2 million project was designed by Lamoureux Pagano & Associates Inc.

The new building will rise about 20 feet from the nearest point of the existing school, which was constructed in 1967. CTA is managing the project to limit interruption to classes and to allow school buses access to the occupied school.

The new 126,200sf middle school will consist of two sections, the first being a three-story structure with classrooms, science labs, art rooms, media rooms, administrative and faculty offices, and work rooms. The second section will be a one- and two-story structure with the cafeteria, kitchen, gymnasium-auditorium, locker rooms, music classrooms, and mechanical and maintenance facilities.

Following completion of the new facility, CTA will demolish the former school and finish sitework, which includes installation of a new soccer field and irrigation system. The current school suffers from deficiencies in structural integrity and in major building systems, including mechanical, electrical, envelope, and roof.

The new Mountview Middle School is being built to accommodate 800 students in grades 6 through 8.