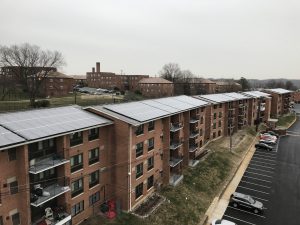 Washington, D.C.  – WinnCompanies and the District of Columbia announced the completion of the District’s largest community solar project aimed at reducing energy bills for low-income residents throughout the nation’s capital. “Solar for All”, a program of the District’s Department of Energy and Environment (DOEE), seeks to provide the benefits of solar electricity to 100,000 low-income households in Washington and reduce their energy bills by 50 percent by 2032.

After being awarded a $1.3 million grant from DOEE’s Solar for All program, WinnCompanies installed a 651 KW (DC) community renewable energy facility on the roofs of Atlantic Terrace Apartments, making it the largest community solar project in the District. 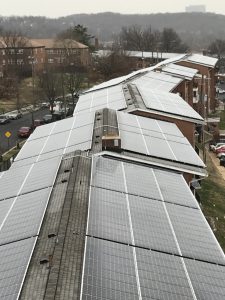 The clean energy from rooftop solar panels installed at Atlantic Terrace will be fed into the District’s utility grid through an arrangement known as net metering. The savings will then be passed back to qualified low-income residents through credits reflected on their utility bills. “Solar for All provides a tremendous opportunity for our residents to take advantage of renewable energy savings, and we’re excited to continue our work with WinnCompanies to expand the availability of solar energy for low- and moderate-income households,” said Tommy Wells, Director, Department of Energy and Environment. “This project brings jobs, clean energy, and energy independence to the District of Columbia, and we hope our work serves as a model for success to communities across the country.”

The solar installation at Atlantic Terrace occurred as the company was completing a $69-million rehabilitation project at the community and its sister property, Atlantic Gardens. The two-year effort not only completed modernized 303 apartments but also preserved both communities as critically needed Project-Based Section 8 housing for 750 residents. WinnCompanies acquired Atlantic Terrace in 1982 and has managed the property since. Built in 1964, it is comprised of 195 units in six three- to four-story garden-style buildings.