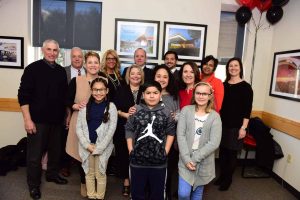 New Britain, CT – Downes Construction Company is topping off its 85 years of business by giving back to the community.

Community leaders gathered at a kick-off ceremony to mark the company’s 85 years in business.

Representatives from all three organizations were on hand for the celebration.

“Downes’ first projects were for the manufacturing companies in New Britain, including Stanley Works,” shared John Downes III, president of the company. “While our foundation is in New Britain, over the decades we have grown to serve multiple communities in our great state. Therefore, our 85th anniversary was created to give back to some of the communities that we have served over the decades.” 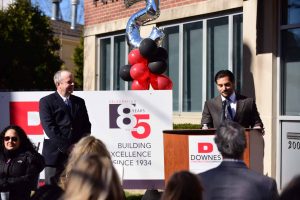 Senator Genarro Bizzarro was among the dignitaries. “It’s obvious that Downes’ 85 years of success is the result of decades of hard work, dedication, and determination,” he said.

Modeled after the Ana Grace Project, whose slogan is “Love Wins,” Downes anniversary giving program promotes love, community, and connection. “The Ana Grace project is a beautiful role model for individuals and the business community,” said Desautel. “We are confident that our late founder, Frank E. Downes, would want to celebrate by giving back to the community.” 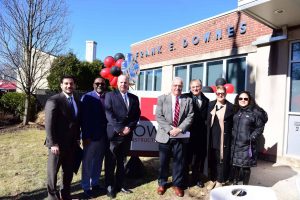 Speaking at the anniversary kick-off were Nancy Sarra, superintendent, Consolidated School District of New Britain; Sam Gray, president and CEO of Boys & Girls Clubs of Greater Hartford; and Joe Carbone, CEO of The WorkPlace of Bridgeport.

Downes Construction Company was founded in New Britain in 1934 by the late Frank E. Downes and Jack Hasson. With a staff of 10 to 12 employees, the company completed several projects at the local manufacturing companies, including Stanley Works.

Today, under the leadership of the third generation of Downes family members, the company has grown to a team of 60 and has a bonding capacity of $500 million, with zero litigation in the company’s history.