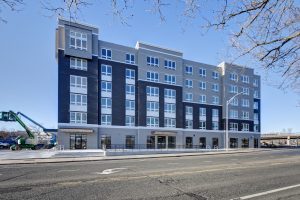 New Britain, CT – Dakota Partners, in partnership with Xenolith Partners and the city of New Britain, has completed construction on phase 1 of Columbus Commons. This mixed-use project transformed the formerly underutilized urban brownfield and previous site of the police station headquarters into a  downtown, transit-oriented development.

In addition to 80 new apartment homes, Columbus Commons features 10,000sf of commercial storefront for local, small neighborhood businesses. Residents of the development will enjoy access to numerous facilities including a fitness center, community gathering space, and bike and tenant storage. 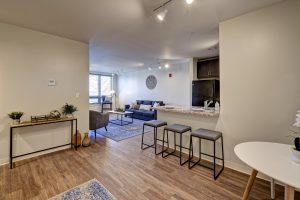 Located in the heart of New Britain off of Columbus Boulevard, this new community offers an attractive urban setting with convenient access to shopping, municipal services, and CTFasTrak, making it an easy commute to Hartford and surrounding areas.

According to the Passive House Institute U.S. database, Columbus Commons is one of the first mixed-use, multi-family communities built to Passive House standards in the state of Connecticut.