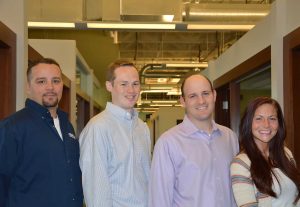 Kevin Neville, project manager, has 10 years of experience in the construction industry providing estimating and construction coordination expertise on large- and small-scale projects. He has worked on the new field headquarters for the Mass. Division of Fisheries & Wildlife, as well as the new 165,000sf facility for Subaru of New England in Norwood.

Peter Mancini, LEED AP, project manager, has over 10 years of experience. He has worked as a project engineer and as an assistant project manager. He has experience reviewing and processing change orders, submittals, and RFIs, as well as assisting with the maintenance of project schedules. He recently completed several significant hospitality, retail, and hospital projects for various clients, including the Hermès of Paris temporary store located at 50 Park Plaza in Boston.

Erik Julio, project superintendent, has nearly 20 years of experience in the construction industry, and he has worked on a number of large-scale construction projects as well as several fast-track fit-out projects in occupied facilities for Columbia. He was a part of the team that completed the Waltham Watch Factory restoration and redevelopment project, which included the adaptive reuse of this 400,000sf building and significant site and environmental remediation.

Columbia is a third-generation construction management firm celebrating its 90th year in the industry.