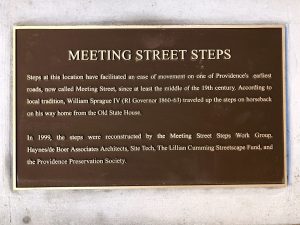 Providence, RI – A bronze marker was recently installed next to the Meeting Street Steps, a historic landmark within the College Hill National Landmark District in Providence.

Restoration work was completed in 2018, following head-on collisions by two drivers over the course of three years. This was the second time the Providence Preservation Society (PPS) has been involved in the restoration of the Meeting Street Steps, including a major restoration in the late 1990s.

Jahn’s Metal Craft recreated the damaged handrail. Bob O’Brien, fabricator of the Benefit Street decorative street lights, donated the bollard at the bottom of the steps which will prevent future damage. Site Specific made the repairs, following consultation with the City of Providence Department of Public Works. 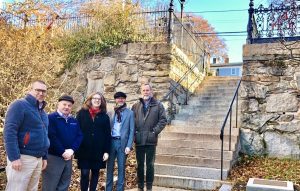 The new bronze marker, created by Michael Healy Designs of Manville, said that “steps at this location have facilitated an ease of movement on one of Providence’s earliest roads, now called Meeting Street, since at least the middle of the 19th century. According to local tradition, William Sprague IV, Rhode Island Governor from 1860-63, traveled up the steps on horseback on his way home from the Old State House.

According to Wikipedia, Governor Sprague participated in the First Battle of Bull Run during the American Civil War while he was the sitting governor. And he is the governor who was born in what is now called the Governor William Sprague Mansion in Cranston. He was later called the “boy governor” because he was the youngest governor of a state at that time, at the age of 29.

Over the years, the steps had deteriorated to the point that they were unusable. This is a public right-of-way, critical for movement today of pedestrians – if not equines – traveling up and down College Hill. For many people, it is part of their daily commute to work or school.