Amherst, MA -The Construction Institute (CI) held its sixth annual Women Who Build Summit on Feb. 19 and 20 at the University of Massachusetts Amherst. It was attended by over 300 industry leaders.

The two-day event began with a tour of the campus and a reception with opening statements by Nancy Greenwald, CI executive director,  and Carolina Cudemus-Jones, UMass Amherst director of design and management. 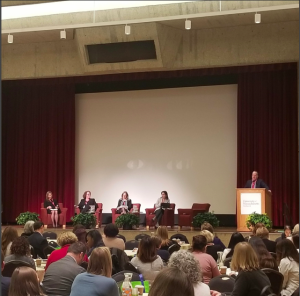 The following day began with welcoming remarks from Greenwald, Cudemus-Jones, and UMass Amherst Chancellor Kumble R. Subbaswamy. Jane Edmonds, vice president of programming and community outreach at Babson College, delivered the opening keynote titled, “Shifting to Face the Winds: Challenges and Opportunities of Leadership in the New ’20s.” Edmonds addressed the ways industry women can advance and support one another in a time of social and political unrest.

The morning “Powerhouse Owners” panel, moderated by Sean Sweeney of Arcadis US, Inc., featured Denise Berger, AECOM; Luciana Burdi, Mass. Port Authority; Barbara Kroncke, University of Mass. Building Authority; and Catherine Walsh, Northeastern University. The panelists shared insights on how they are leading their organizations and industry into the future.

Attendees were then invited to participate in breakout sessions titled Would You Hire You?, Reputation Capital, Don’t Call Them Difficult, and Forging Your Own Path – 4 Perspectives on Creating Your Roadmap to Success.

Following lunch and networking, Aisha Nadar, senior consultant at Advokatfirman Runeland AB, gave the afternoon keynote titled “Building Your Career: Challenging the Conventional Wisdom.” Nadar spoke on how widely-held, yet unfounded beliefs like “a girl will not do as well as a boy in math” must be challenged, and how challenging conventional wisdom has advanced her career.

Finally, Denise Berger of AECOM gave the summit’s closing keynote titled “Lessons Learned,” reflecting on her most important life lessons and the day’s stories and takeaways. The summit ended with closing remarks and the Champions of Change Award presentation. Mark Adams of Columbia University Irving Medical Center and Carolyn Stanworth of BL Companies received the award for their outstanding contributions to empowering women in the AEC industry.

Sara Mannes is the digital media manager at High-Profile Monthly.