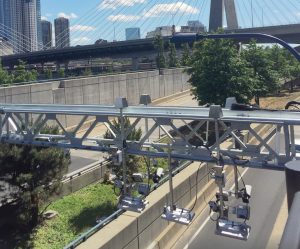 CDM Smith, Inc. with world headquarters in Boston, was retained by MassDOT to assist in converting 138 miles on the Massachusetts Turnpike from the New York border to Logan Airport to an All-Electronic Tolling System (AETS) following the 2016 closure of all toll booths on the Pike.  AETS allow for free-flow speeds on mainline highways with the use of a toll transponder or license plate image capture for transactions, eliminating long backups caused by toll booths and cash collection. MassDOT utilized a “best-value” Design-Build procurement method by selecting a team that included CDM Smith, Inc.