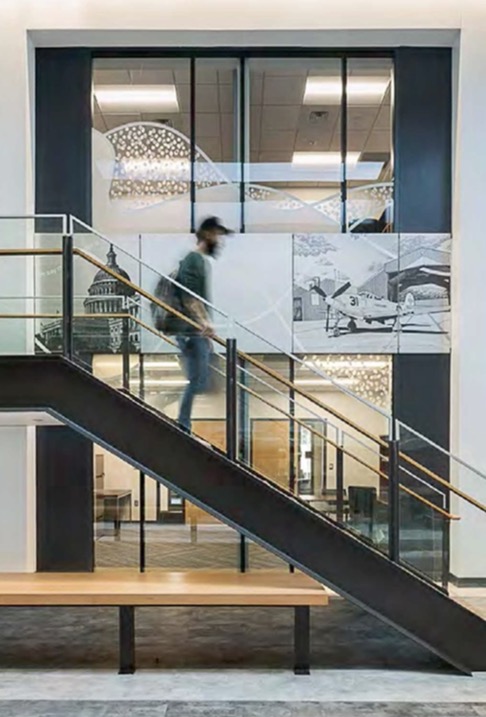 Included in the project’s scope was a 10,000sf addition for program space, a new HVAC system tied to the campus’ central plant, and all new electric wiring and devices, windows, ceilings, and lighting. Additional improvements consisted of a comprehensive fire protection system and interior renovations of the corridors and toilet rooms, in all, at a cost of approximately $19.3 million. 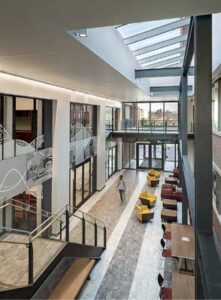 The site for the 76,500sf project building addition takes advantage of the location along the main pedestrian circulation spine through the campus. The exterior follows the original’s brick veneer and sloped copper roof aesthetic, integrating the building into the established campus fabric. Because it is significantly smaller than the existing building, the designers visually heightened the addition utilizing a custom vertical brick pattern, multi-floor curtainwalls, and exterior building-mounted lighting.

The new addition includes work and learning spaces, a large terrace with a steel and concrete gateway, and a new skylit lobby, where floor-to-ceiling glazing that spans into adjacent meeting rooms and offices features graphics developed by Svigals + Partners. The artwork is designed to celebrate the university’s mission to encourage research and outreach by featuring the words of the school’s namesake, Henry Barnard, and the work of notable alumni.