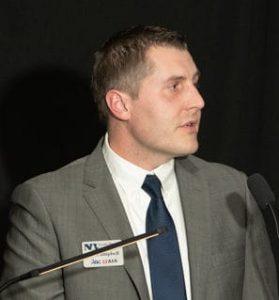 Joseph Campbell speaks to the audience at the ABC NH/VT annual meeting.

Bedford, NH – Joseph Campbell, president of North Branch Construction in Concord, has been named chairman of the board of directors for the Associated Builders and Contractors NH/VT Chapter.

He has been a member since 2014 and was voted into the chairman position at the chapter’s annual meeting held on February 7.

In his first speech as chairman, Campbell highlighted the chapter’s impressive accomplishments over the past year under the leadership of outgoing Chairman Wayne Symonds of Methuen Construction, and touched upon his own focus for 2019, stating “A chapter of our size receiving national recognition for being No. 1 in membership retention doesn’t just happen by coincidence. It is the result of providing invaluable, tangible benefits to our members. We made a lot of progress on many fronts in 2018, developing a solid foundation upon which we will continue to build for 2019.”