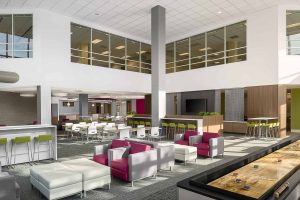 Braintree, MA – Campanelli recently announced it has signed its first lease with Collegium Pharmaceuticals for 50,678sf at the newly redeveloped 100 TECH located at 100 Technology Center Drive in Stoughton.

In collaboration with Peter Brown, director of leasing at Campanelli, the Newmark Knight Frank suburban team of Mike Frisoli and Tyler McGrail serve as the exclusive leasing agents for the property. CBRE’s John Lashar and Steve Purpura represented the tenant.

100 TECH underwent a rebranding to match several million dollars in upgrades to the infrastructure and common areas. Recently unveiled improvements include a strikingly redesigned main entrance, new lobby finishes, a new café concept by FOODA, an expansive new fitness center featuring shower and locker rooms, and a spin studio with 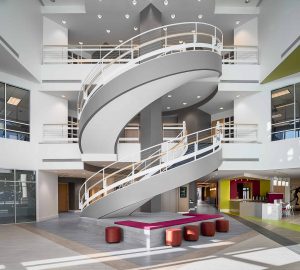 virtual ride instruction, and the addition of meeting/conference space adjacent to the café, allowing tenants to reserve these areas for larger group meetings, as well as designated spaces within the café for gaming such as foosball and Ping-Pong. Exterior improvements include patio seating with complimentary Wi-Fi, a fire pit, and a multi-sport court.

Collegium Pharmaceuticals, a specialty pharmaceutical company focused on becoming the leader in responsible pain management, will occupy the entire third floor and half of the second floor when their lease commences in the summer of 2018. Campanelli’s in-house construction arm, Campanelli Construction, will perform the tenant build out.