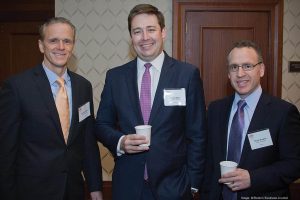 Hudson, MA – Calare Properties (Calare), a private, Massachusetts-based investment firm with a focus on industrial real estate, was recently recognized by the Boston Business Journal (BBJ) at the “2015 Best in Boston Real Estate” Awards. Calare received honors in the Industrial/Flex Category for its 401,316sf lease transaction to Affordable Interior Systems, Inc. (AIS) at 25 Tucker Drive in Leominster, Mass., and in the Rehab/Renovation Category for its 67,000sf deal with Jack’s Abbey Brewing at 100 Clinton Street in Framingham, Mass.

Bill Manley, CEO and CIO; Bryan Blake, president and executive director; Charles Nolfi, director of marketing and investor relations; Mark Shapiro, chief financial officer; and Lauren Plant, investor relations, were in attendance on behalf of Calare to accept the honors at the BBJ Real Estate Awards Breakfast, which was held at the Sheraton Hotel in Boston. The event hosted over 100 of the biggest movers and shakers in Greater Boston’s commercial real estate industry including major developers, property owners, brokers, dealmakers, and builders.

“It is truly special to have two of our deals honored at the Best in Boston Real Estate Awards, and we are grateful for this significant recognition as we continue to grow in the market,” commented Manley. “These honors speak to our ability to not only acquire and manage quality assets, but to also attract premier tenants in the market. The 2015 awards mark our third consecutive year receiving a BBJ honor, and we hope to continue this streak with additional noteworthy deals going forward.”

Calare purchased 25 Tucker Drive, a 588,000sf distribution and manufacturing facility in December 2012 and immediately implemented a significant redevelopment program and marketing campaign, positioning the building as a highly attractive tenant destination. In early 2014, Calare worked in conjunction with CBRE/New England to secure the 401,316sf lease transaction with AIS, Inc., which is now the lead tenant at the facility.

Calare leased the 67,000sf space to Jack’s Abbey Brewing at the 100 Clinton Street location in mid-December 2014. Currently, the team is implementing a significant capital improvement/renovation program at the facility, which includes the addition of new lighting fixtures, restrooms, exterior paint, HVAC units, landscaping, and electrical services. The new space not only allows the craft brewing company to remain in Framingham, but also provides an exciting atmosphere for continued growth and customer engagement.

The annual Best in Boston Real Estate awards recognize the dealmakers, brokers, landlords, and service providers who together help bring each year’s most significant transactions to life. The biggest real estate deals are recognized in several categories including Office, Industrial/Flex Use, Rehab/Renovation, Mixed/Special Use, Residential, Deal of the Year, and the Visionary Award.