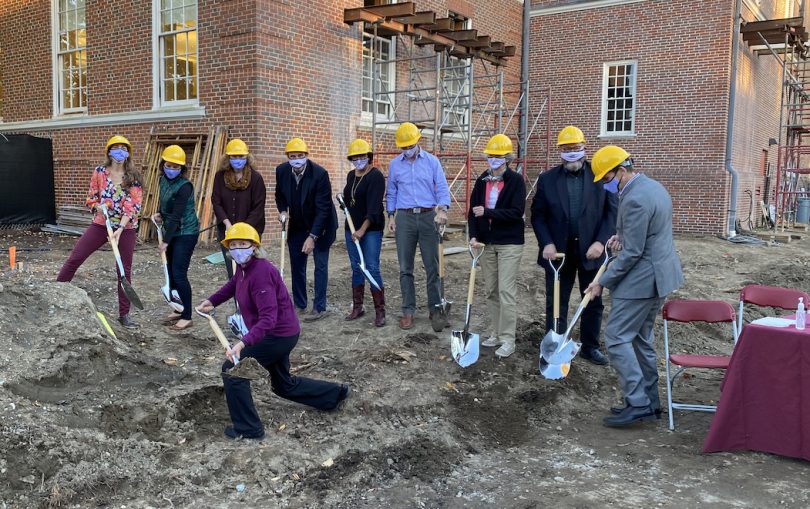 Members of the Concord Public Library Corporation (CPLC), library committee and friends of the library at the recent groundbreaking.

Concord, MA – The Concord Public Library Corporation (CPLC), library committee, and friends of the library broke ground on an addition and renovation at its main branch with Johnson Roberts Associates and C.E. Floyd Company on Oct. 14. This project has been in the works since 2013, when the CPLC purchased the neighboring 222-year-old Heywood-Benjamin House.

The 23,500sf project includes an addition to connect the Heywood-Benjamin House to the main library along with interior renovations to both buildings. This additional space enables the library to make many upgrades and expand its offerings to the community.

The project includes a new and bigger children’s library with an activity room, a teen space for study and conversation, an event space that seats 140 people, a cafe area for coffee and conversation, a makerspace with video editing and podcast studios, a new accessible entrance, and much more.

Based on an energy model that was done during the design process, the expansion is expected to use 48% less energy psf than the baseline library project in the U.S.

John Boynton, a trustee of the CPLC, thanked everyone who has been so generous with their time and money to make this project possible.

“It’s been an exciting project to be a part of because we’ve had such an outpouring of support,” Boynton commented. “It’s really exciting to see the construction starting. We’ve been talking about this day for a long time.”