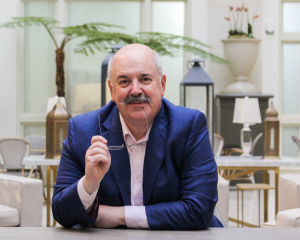 In 1984, while a student at the University of Minnesota, Burt Visnick traveled to China for 10 weeks as part of the College of Design’s Asian Study Program. The program was brand new at the time, but had a profound impact on Visnick, who was inspired to give back to students pursuing careers in architecture, landscape design and interior design.

Visnick, AIA, IIDA, NCARB, is a founding principal at Visnick & Caulfield, an architectural firm based in Boston, specializing in interior architecture. Nine years ago, he and his wife, Long Xinrong Visnick (now deceased), established the Burton S and Long X Visnick Endowed Asian Travel Fund to support students participating in the Asian Study Program. In 2015, Visnick created the Visnick Family Faculty Award to help participating faculty travel with, and provide education for, the students while abroad.

Students take in the view of Fukuoka, Japan from the top of the Acros building, designed by Emilio Ambasz.

Through the program, students spend three to four weeks learning about urban design by studying and exploring small scale design projects in a city in Asia. They learn about the history of those locations and current dilemmas that designers can address and work to remediate. Visnick has traveled with the students to both China and Japan and, as a member of the Dean’s Advisory Board, visits the university several times a year to mentor and talk with students about their travels.

He says his mission is to encourage the students to “learn for life,” something the Asian Study Program has a big part in. He continues to learn from his own travels to China over three decades ago, by following the practices of Chinese designers and observing how far they’ve come in that time. He hopes to inspire current students to find ways to exercise their own creativity while being environmentally sensitive at the same time, something he says is demonstrated well in many of the buildings they study overseas.

Visnick and University of Minnesota and Kansai University students at their final design presentation.

Next summer, Visnick & Caulfield will welcome a student from the Asian Study Program as an intern at the firm. Visnick says he is dedicated to mentoring young people just starting off, and many of Visnick & Caulfield’s full-time employees began their careers as interns at the company.

The most important aspect of the Asian Study Program, Visnick says, is providing students with inspiration and real-world experience that will drive their passion for architecture and design, something that can’t be acquired by looking at a computer screen or sitting in a classroom. It’s his own experience traveling to China that continues to influence his design projects and fuel his passion for the craft.

Visnick adds that working with partners in other countries like China or Japan “allows us to think more about sustainability and what it may mean from one culture to the next, and encourages us to think more about people and the well-being of space, how people occupy space and how they intellectually own space over a long period of time.” That is something he’s proud to incorporate into his own work at Visnick & Caulfield, and to pass on to the next generation of designers.

Emily Langner is the associate editor and staff writer at High-Profile Monthly.