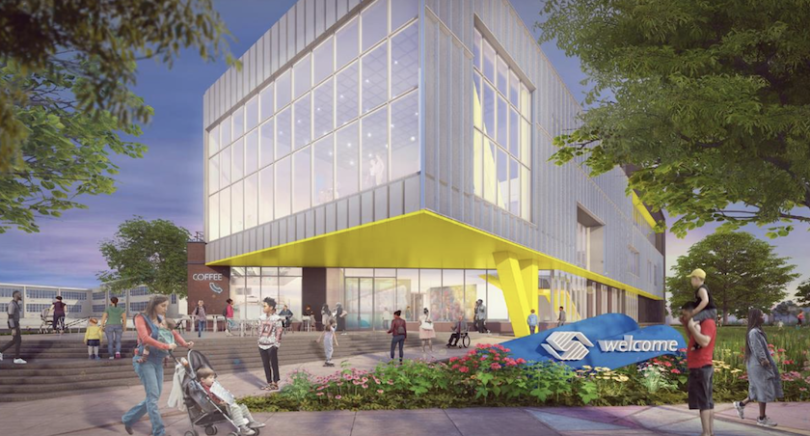 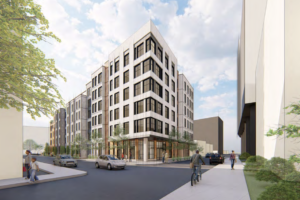 The Dorchester Fieldhouse at 315 Mount Vernon Street in Dorchester will bring youth programming and employment opportunities to the neighborhood through the construction of a new 3-story recreation complex. The project, proposed jointly by the Boys and Girls Club of Dorchester (BGCB) and the Martin Richard Foundation, will include an indoor athletic field and courts, track, fitness and training rooms, classrooms, teaching kitchen, event space, office space, and cafe.

The project at 90 Braintree St. will support the artist community in Allston by creating new housing, as well as new income-restricted artist live-work space. Targeting LEED Gold, the new 6-story building will create 111 new rental units, 22 of which will be designated income-restricted, and five of which will be designated as artist live-work space. Community benefits include a new Bluebikes station and $111,000 for improvements at nearby Penniman Park.

The project at 1154-1156 Dorchester Avenue in Dorchester will build an addition onto the existing building to create a transit-oriented 5-story building. The project is responsive to the BPDA’s PLAN: Glover’s Corner draft recommendations and will create 20 new homeownership units, three of which will be income-restricted, as well as commercial, office, and community space on the ground floor.

The project at 1395 Washington St. will build 33 new housing units in the South End, four of which will be income-restricted. The developer will demolish the existing building and construct a new 6-story building containing housing and commercial retail space. The developer will also contribute $25,000 for open space improvements in the South End and widening the sidewalk in front of the project site. 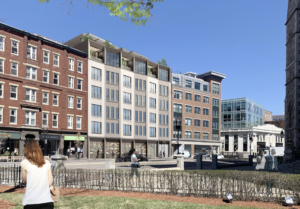 The North End Cross Street Boutique Hotel project, located on Cross Street between Salem and Endicott Street, will construct a 5-story, 124 room hotel that will also house two restaurants and a seasonal rooftop dining terrace while transforming the existing plaza into a more pedestrian-friendly space. An open air passageway will connect Cutillo Park with the Rose Kennedy Greenway. The project is designed to be prepared for sea level rise, and is LEED Gold certifiable.

The Herb Chambers Companies is redeveloping the existing Honda auto dealership on Morrissey Boulevard. The project will fund streetscape improvements, and will contribute $100,000 toward measures identified through Climate Ready Dorchester including a deployable flood gate.

The new Sweeney Field project includes the transformation of a 3.06 acre parking lot in Mission Hill into Wentworth Institute of Technology’s (WIT) new athletics home. The new turf field will be built over a parking level, of which 25% of the spaces will have EV charging stations. The project will dramatically improve the streetscape and pedestrian areas along Parker, Station, Halleck and Prentiss Streets.

Additionally, the BPDA board approved space for a future Emergency Medical Services (EMS) station to serve the South Boston Waterfront. The space, which will be located in the Raymond L. Flynn Marine Park (RLFMP) adjacent to Pier 10 on Dry Dock Avenue, will be leased to the Boston Public Health Commission (BPHC) to provide necessary emergency services to the public.

The BPDA board also voted to allow The Anthem Group to continue to activate Shipyard Park in the Charlestown Navy Yard through 2025. The Anthem Group has been running the space at Shipyard Park since 2019 as “The Anchor,” a public gathering space that offers free community programming and events. Additionally, the Navy Yard will once again host an art exhibition on the Harborwalk titled “Of Many Minds,” made up of 20 sculptures and inspired by the experiences of Navy Yard workers.