Boston – This month, the Boston Planning & Development Agency (BPDA) board approved development projects in neighborhoods across the city of Boston. Overall, the new development projects approved will create an additional 354 residential units, including 44 income-restricted units, and 330 construction jobs. 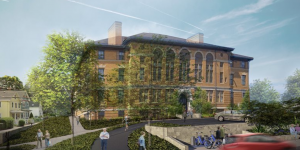 The William Barton Rogers Middle School in Hyde Park will be reactivated to create 75 LGBTQ-friendly, senior housing rental units, 50 of which will be income-restricted. The building will include 10,000sf of community space.

449 Cambridge Street in Allston will replace the existing structure with two new residential buildings. Altogether, these two buildings will contain 166 residential units, 28 of which are income-restricted, 2,400sf of ground-floor retail space and approximately 80 accessory parking spaces. Additionally, 10 of the units are compliant with the city of Boston’s Compact Living Policy Pilot Program.

365 Western Avenue in Brighton will construct a six-story building comprising 65 rental units, 10 of which are income-restricted. Community benefits associated with the project include contributions for installation of enhanced bus stops on Western Ave and other transit improvements in the area.

421-425 Market Street in Brighton will bring 23 rental units, including three income-restricted units to the neighborhood. Additionally, the newly-approved project will contribute funds to transportation improvements resulting from the  BPDA’s ongoing Allston-Brighton Mobility Study.