The 244-284 A Street project in Fort Point will build three new buildings and an underground parking garage. The development incorporates significant commitments to affordable housing, open space, civic and cultural space, environmental resilience, and the arts community in Fort Point. The buildings include a mixed-use residential building with 340 units, a commercial building, and a laboratory/research and development facility. Integrated into the building of this development is a flood protection barrier known as a berm, which is intended to be part of a larger resiliency effort to the existing neighborhood in response to the threat of sea level rise and storm surge. The design will also provide a seamless connection from Fort Point Channel to new public parks and public realm improvements to be constructed on the site, and beyond into the larger community. 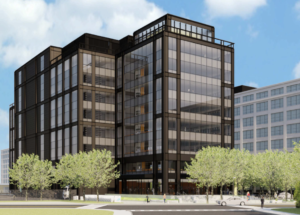 Located on BPDA-owned land in the Raymond L. Flynn Marine Park (RLFMP), the 24 Drydock Avenue project will build a new 8-story life sciences development, which also includes marine industrial use and supportive uses for the adjacent Boston Ship Repair (BSR) business. This project will also improve the public realm by expanding sidewalks, upgrading landscaping, street lighting and access to new public open space, while continuing to support the needs of truck traffic in the RLFMP. The project will create a publicly accessible landscaped plaza. Building utilities will be located above ground to protect against sea level rise. 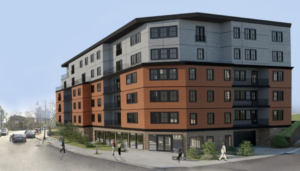 The project at 120 Bowdoin Street in Dorchester will convert what is now vacant land into a new 5-story mixed-use building comprised of housing and retail space. The rent to lease the retail space will be subsidized. The building will contain 38 new units, seven of which will be income-restricted. In addition, the design of the building acknowledges the local context of triple decker residential buildings, and contributes to the urban fabric with an active ground floor with retail space, and a welcoming public entrance with a new shaded sidewalk path to the Geneva Cliffs. It will also include a solar roof, in support of sustainability goals.

Preserving the existing facade of three buildings on Wareham Street in the South End, the 65 Wareham Street project will build new lab/office space, as well as retail space. The building will total five stories once completed. The street-level retail use will activate the Wareham Street side of the development. This project will improve the public realm by replacing all sidewalks on the easterly side of Plympton Street. In addition, the project will support parks, open space, and South End cultural programming with a $25,000 contribution.

The BPDA board also adopted the Western Avenue Corridor Study and Rezoning initiative, which was launched by the BPDA in 2019 to address development pressure and transportation challenges in the formerly industrial corridor stretching through both Allston and Brighton. The plan allows for higher density mixed-use development near transit, and encourages residential and cultural uses everywhere within the study’s area. The plan also calls for an improved network of sidewalks and paths that would better connect the neighborhood to the Charles River Reservation, and recommends the implementation of a Western Avenue Transitway, which would see dedicated bus lanes and low stress bike lanes in the corridor.

Working in alignment with Mayor Wu’s goals for resilient, equitable, and connected communities, the BPDA also announced it will release an RFP to develop a design vision rooted in the diversity of Boston’s people and places. The BPDA plans to engage with a wide range of subject experts and community members during the study.