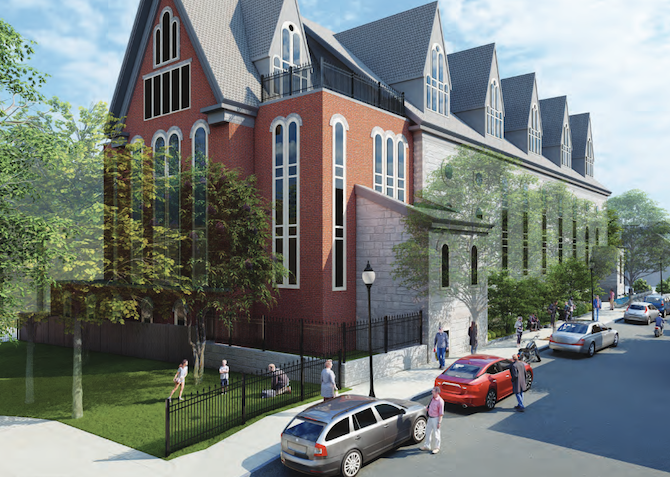 The Nuba Residences project will build a 100% affordable housing development on the publicly-owned Parcel 8 at 400-401 Melnea Cass Blvd. in Roxbury. The project will include 114 units of multifamily rental and homeownership units, as well as live-work units. The proposal includes commercial space intended to be for retail, cafe, or exhibition use, and an adjacent park at 2070 Washington Street.

Located in the Upham’s Corner Arts and Innovation District, the project at 554-562 Columbia Road will restore and renovate the historic Fox Hall building, while also building a completely income-restricted housing development behind the original building. The pedestrian experience will be improved with new street trees, widened sidewalks, improved landscaping and lighting.

A former church building in South Boston will be converted into a 6-story residential building with 35 rental units, including six income-restricted units. The project at 354 E Street will maintain the majority of the existing historical structure and architectural characteristics of the Italianate-style church building. Public realm improvements will include new crosswalks and better sidewalks in the area.

The project at 363 E Street will construct a new 4-story multi-family residential development containing 24 rental units, four of which will be income-restricted. It will contribute $90,000 to support parks and open space. In addition, the project will provide electric vehicle charging space, and is designed to meet LEED Gold standards.

Located in Mattapan, 1525 Blue Hill Avenue will construct a new 5-story building containing 16 residential units, three of which will be income-restricted. It will also create commercial space on the ground floor for the existing healthcare services on the site now. Community benefits include planned improvements to the public realm on Blue Hill Avenue and Regis Road including new sidewalks.

The project at 7 Dana Avenue in Hyde Park will construct a new 4-story building with 27 rental units, five of which will be income restricted. The project will provide 34 bike parking spaces, and will contribute to the city’s Bluebikes system. It will also improve access to the Hyde Park Commuter Rail Station nearby by improving sidewalks and pedestrian access.

Located in South Boston, the project at 270 West Second Street will construct a new 5-story residential rental building. Twelve of the 81 units will be income-restricted. It will include a courtyard and a dog park. This project will provide a Bluebikes station onsite. It will include contributions to the city’s bikeshare program, a transit service analysis in the area, and other public realm improvements.

Located in Roslindale, the project at 59-63 Belgrade Avenue will construct a new 4-story residential building with 31 rental units, including six that will be designated income-restricted. The project will support the public realm with the addition of crosswalks, sidewalk, and curb extensions.

The project at 635 Hyde Park Avenue in Roslindale will construct a new 4-story building with 27 rental units, including five income-restricted units, and ground floor retail space. This project will make significant public realm improvements to nearby Canterbury Street and Hyde Park Avenue with the creation of new sidewalks and street trees.

An underutilized 1-story office block will be replaced with a new apartment building at 40 Soldiers Field Place, overlooking the Charles River in Brighton. The project will add 61 rental units, including 10 income-restricted units. The project responds to the BPDA’s Allston-Brighton Mobility Study, and will contribute $40,000 to implement the plan’s recommendations, $68,000 to Leo Birmingham Park improvements, and $10,000 to the Allston-Brighton Transportation Management Association.

The project at 1789 Commonwealth Avenue in Brighton will renovate the existing multi-family home on site, and also build a 5-story addition with 39 rental units, seven of which will be income-restricted. The project will contribute $30,000 to support local parks and open space, and has committed to improving the nearby intersections to be safer for pedestrians and bicyclists.

The transit-oriented development at 1-4 Terrace Place in Mission Hill will build a new 6-story residential building with 47 homeownership units, seven of which will be income-restricted. The project will contribute $71,688 to the Boston Transportation Department’s (BTD) Terrace Street Study, and $12,925 to the city’s Bluebikes program. The new development will include solar renewable energy systems, and is targeting LEED Platinum standards.

St. Elizabeth’s Medical Center will construct a 6-floor parking garage on its campus in Brighton. In addition to the 610 parking spaces and bike parking room, the project will add a two bay ambulance facility. The project intends to ease the burden of parked cars on the surrounding residential community, and is constructing new sidewalks, adding street trees, and building a bocce court for community use.