Boston – The Boston Planning & Development Agency (BPDA) board of directors recently approved four new development projects representing over 1.7 million sq. ft. The new projects will create 388 residential units, 94 of which will be designated income-restricted, and will support hundreds of construction jobs and more than 3,000 permanent jobs.

Following an 18 month community engagement process, the Harvard Enterprise Research Campus Phase A will build a brand new mixed-use development consisting of new housing, office/lab space, a hotel, conference center, restaurant, and retail space, along with nearly three acres of public open space. Of the 345 units of housing, 25%, or 86 units, will be income-restricted. Harvard will also contribute $25 million to establish an Allston-Brighton Affordable Housing Fund that will support affordable housing, affordable homeownership, and housing preservation in the neighborhood. Phase A will also create the Allston Greenway, eventually connecting to the west to Ray Mellone Park and east toward Soldiers Field Road. 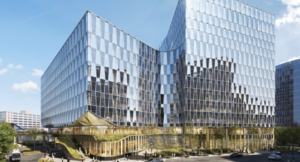 The project at 701 Congress Street Parcel H, also known as Seaport Circle, will transform a parking lot into a 13 story lab/research and development facility on the South Boston Waterfront, which will also contain retail space. Training rooms, simulation labs, meeting rooms and office space will provide nonprofits and interested user groups with educational and training space. Seaport Circle will build a new station at the Silver Line Way stop, and enhance the public realm to respond to the growing transportation needs from the Raymond L. Flynn Marine Park.

The new 4-story project at 4011-4019 Washington Street in Roslindale will be designed to encourage alternate forms of transportation, with close proximity to public transportation, a Bluebikes station, ZipCar, and bike storage and parking. The project will build 19 homeownership units, four of which are income-restricted, as well as retail space. This building will be environmentally conscious, including a green roof to reduce building energy costs and slow stormwater runoff,  and energy conservation efforts that will reduce the urban heat island effect and greenhouse gas emissions. The project will also make public realm improvements to Washington and Lesher Streets.

Located in Dorchester, the project at 1153 Washington Street will build a new mixed-use, 4-story development with 24 rental units and ground floor commercial space. Four of the residential units will be income-restricted. The development will contribute $45,000 to the Parks and Recreation Department to support nearby Dorchester Park and WM. Gary Walsh Playground.

Additionally, the BPDA has adopted a new decarbonization strategy to achieve zero net carbon emissions at all BPDA-owned properties. The strategy builds on Carbon Free Boston and the Climate Action Plan Update, the City of Boston’s initiative to achieve carbon neutrality by 2050. The BPDA has laid out strategies that align with the various types of real estate assets in the agency’s portfolio. All improvements and renovations will be made while supporting local and nonprofit BPDA tenants.