Located on the South Boston Waterfront, the Parcels O+P project will demolish the current building on Parcel O and build a new 8-story life sciences/research and development building. It will also rehabilitate the building on Parcel P to be used as amenity space for tenants in the Parcel O building. This will be the first development project to participate in the City of Boston’s Climate Resiliency Fund. The proponent will make annual contributions for investments in the Raymond L. Flynn Marine Park (RLFMP) to mitigate the impacts of sea level rise for the RLFMP. The project responds to the BPDA’s Diversity, Equity, and Inclusion requirements by including MBEs or WBEs in pre-development, construction, ownership, and ongoing operations. It will create 950 permanent jobs and 600 construction jobs. 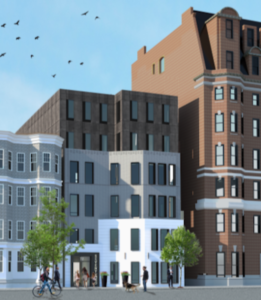 The project at 135 Dudley Street will construct two buildings in Nubian Square. The 168 units will comprise 60 income-restricted rental units and 27 income-restricted condominium units. This project will provide a significant public open space to support existing uses in the area including the Roxbury Boston Public Library branch and court house. It is LEED Gold certifiable, and  will create 285 construction jobs and 35 permanent jobs.

The development at 72 Burbank Terrace, proposed by the Fenway Community Development Corporation (CDC), consists of one 6-story building containing 27 compact living units, all of which will be income-restricted. In addition, the Fenway CDC will contribute $10,000 to the Boston Parks and Recreation Department to go toward the upkeep of nearby Symphony Park. It is LEED Silver certifiable, and will create 50 construction jobs.

The 804 Hyde Park Avenue project will construct one building with a 3-story section along Hyde Park Avenue and a 4-story section along American Legion Highway, totaling approximately 36,000sf. There will be 34 units, 20% of which will be income-restricted. The project will contribute $50,000 to the Boston Transportation Department to relocate and enhance two bus stops, and will bring new sidewalks, street trees, and other pedestrian improvements to the site. Approximately 50 construction jobs will be created. 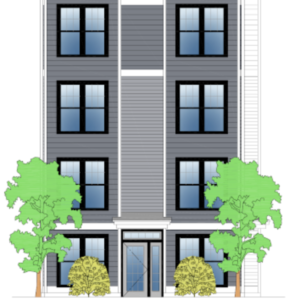 Located in Jamaica Plain, 3-5 Woodlawn Street will build a new 4-story building containing 13 compact living studio units. As part of the community benefits for the project, $3,575 will be contributed to the Bluebikes program and $6,669 to the Boston Transportation Department to fund street improvements in the vicinity of the project. Ten construction jobs will be created.

In addition to the new projects, the BPDA Board approved three Notice of Project Changes. The board approved to change the original project at 601 Congress Street from a single tenant office building to now include laboratory/research and development uses. The updated 64 Allandale Street project will construct a total of 16 new units, including ten new townhouses, four residential units through the renovation of the existing house on the site, and the creation of two additional residential units through an addition to the existing house. The board approved a reduction in building height, as well as a reduction in total units, for the project at 37 Wales Street.

The board also adopted the PLAN: South Boston Dorchester Ave. Transportation Plan. The plan establishes a framework to outline the goals, objectives, and evaluation metrics that support of the planning study’s vision. These principles include providing quality mobility options to connect people to life’s activities, ensuring the safety of all travelers, preparing for climate change and reducing greenhouse gas emissions, improving transportation for vulnerable populations, and encouraging financial stewardship and implementation mindset.

Additionally, the BPDA approved the next step to move the Resilient Fort Point Channel Infrastructure Project forward, hiring the Woods Hole Group to complete the Environmental Review process for the project. The project will implement vital flood protection infrastructure in a portion of Boston’s Fort Point Channel to reduce flood risks to South Boston and adjacent neighborhoods.

Following re-evaluations, the BPDA will invest additional resources for the PLAN: Mattapan initiative, increasing the scope of the contract with Mass Design Group, the lead consultant and partner of the BPDA for the study.