Boston – The Boston Planning & Development Agency (BPDA) board of directors approved development projects in neighborhoods across the city of Boston, which will result in new market-rate and income-restricted residential units, economic development, and jobs.

In addition to development projects, the BPDA Board voted to adopt the Coastal Flood Resiliency Design Guidelines. The Guidelines build on Mayor Walsh’s Climate Ready Boston and will serve as a resource to translate flood resiliency strategies into best practices.

The BPDA Board also approved next steps for PLAN: South Boston Dorchester Avenue, and voted to adopt a South Boston Neighborhood District Text Amendment which will now go to the Boston Zoning Commission for approval. 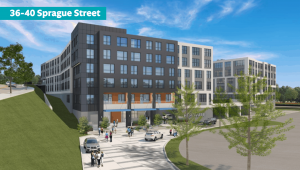 Located in Hyde Park’s Readville, 36-40 Sprague Street will house 247 rental units, 32 of which are income-restricted, across two, five-story structures in Hyde Park: the Sprague Building and the Courtyard Buildings, and will include 14,000sf of new, local retail and 3,000sf of new community work space.

Surrounding the buildings is a courtyard featuring outdoor recreation and gathering spaces. Amenities for the building include fitness facilities, a coffee shop and restaurant, and a daycare. There is also parking for approximately 251 vehicles.

The project will result in a $10,000 contribution for the programming and maintenance of Iacono Playground. Additionally, the proponent will provide transportation mitigation to the surrounding area, including new traffic signals, associated pedestrian and accessibility improvements and a Transit Incentive Subsidy Program.

The project is located in the Readville area of Hyde Park. Readville was identified as an expanded neighborhood in “Imagine Boston 2030”. 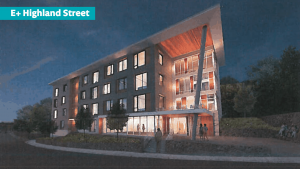 273 Highland Street, located in Roxbury, will be the largest E+, carbon neutral residential building in Boston. The four-story building will contain 23 rental units, 15 of which will be income-restricted. There will be a mix of four one-bedroom units, 15 two-bedroom units and four three-bedroom units, and the project will create 30 construction jobs.

Guided by the City of Boston’s E+ Green Building Program, the project will be a high-performance, energy positive (E+) building, with the goal of producing more energy than it consumes. 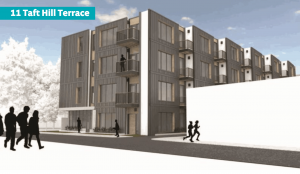 11 Taft Hill Terrace moves forward with 16 home-ownership units in Roslindale, including two income-restricted units and and a single, one-bedroom ADA unit. It will include 16 bike storage racks and 14 covered parking spaces, and will add 60 construction jobs.

The first level of the four-story building consists of the ADA unit, a lobby and 14 parking spaces. The second, third and fourth levels consist of 15 home-ownership units, including two income-restricted units. These units will be a mix of one-bedroom, two-bedroom and three-bedroom units.

The project will bring several public benefits to the community, including funding to improve access around Adams Park in Roslindale and a contribution to the Gateway Path Project in the Roslindale neighborhood.