Boston – The Boston Planning & Development Agency (BPDA) board of directors this month approved development projects in neighborhoods across the city of Boston, which will result in new residential units, economic development and jobs.

75-81 Dudley Street will construct a new, four-story, 20-unit, 100% income-restricted homeownership building on two vacant parcels owned by the city of Boston. The building will also contain ground floor commercial space and bicycle storage, and is consistent with the community goals outlined in PLAN: Nubian Square, approved by the BPDA board in 2019 (formerly known as PLAN: Dudley Square).

597-599 Columbus Avenue (Northampton Street Residences) will redevelop a 9,586sf surface parking lot into a new five-and-a-half story residential building with 47 rental units, all of which are income-restricted. There will also be 47 bicycle storage spaces available on-site. The project will create 70 construction jobs, and will allow the preservation of 97 expiring income-restricted units at an adjacent site. 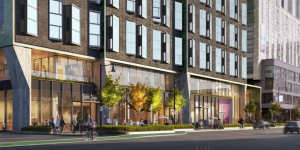 1252-1257 Boylston Street will bring a 15 story, 226,700sf mixed-use building with 451 rental units and ground-floor retail space to the Fenway. Of the total rental units, 68 will be income-restricted. In recognition of the site’s history and affiliation with the LGBTQ community, the development team has signed a letter of intent with The Theater Offensive (TTO) to develop a 10,000sf LGBTQ-centric, black box theater as part of the development. The project will bring a number of community benefits to Fenway and the city of Boston as a whole, and will create 310 new construction jobs and 125 permanent jobs.

A Notice of Project Change for 387-397 Dudley Street in Roxbury moved forward this month. This NPC doubles the number of income-restricted homeownership units from 12 to 24 units, all of which are income-restricted.

The board approved a Notice of Project Change (NPC) for Washington Village located at 235 Old Colony Avenue in South Boston. The NPC updates the previously approved project to increase the number of rental units from 124 units to 214 units.

The board also approved a NPC for 154 Terrace Street in Mission Hill which represents a reduction of 18,750 gross square feet, three stories, 49 units and 59 parking spaces. The NPC also includes a total of 46 income-restricted units, 20 more than were included in the originally approved project.

The board also approved the direction of up to $5 million in Housing Linkage Funds from the Government Center Garage Redevelopment Project in support of Pine Street Inn and The Community Builders, Inc proposal to create 202 units of supportive and income-restricted housing at 3368 Washington Street in Jamaica Plain. These funds will contribute to construction costs and the creation of the affordable rental housing units on-site.

After an open and transparent Request for Proposal (RFP) process, the board authorized the tentative designation for the long-term lease and redevelopment of 24 Drydock Avenue in the Raymond L. Flynn Marine Park (RFLMP) to The Cronin Group, LLC. This designation advances the opportunities called out in the RLFMP Master Plan Update, including the promotion of maritime economic development and the retention of jobs by allowing Boston Ship Repair, the largest ship repair company in New England, to remain on-site.

The BPDA selected The Cronin Group based on their proposed public benefits, including a permanent space for the development team to assist non-English speaking employees with language skills, a permanent, programmable space for Save the Harbor/Save the Bay and dedicated on-site classroom space for Ron Burton Training Village, a community-based, youth-focused education and workforce training program. The RFP language included diversity and inclusion requirements that the BPDA now includes in all RFPs for publicly owned land.